John Martin is no stranger to bike builds. Or Katanas, for that matter. Did you see the immaculate Katana on display at Motorcycle Live last year? Or as recently as this year’s London Show? Well, that was his. However, his latest project is a little different. After his wife, Florence, was diagnosed with primary progressive multiple sclerosis, he turned his hand to the thing he’s best at in an effort to raise money for charity; building another Katana.

“My wife was diagnosed two years ago,” John explains. “Naturally, this was a massive shock, tears were shed, and things were going to change for us. We were both very active in the motorcycling scene, and both rode bikes to gatherings, shows, and events. Flo can no longer ride, but thankfully can still ride pillion for the occasional short ride.

“But ultimately there is no cure or treatment, however, she found that keeping busy helped her cope, and decided to do her part to try and help sufferers of MS. She and a few friends started doing things like cake bakes and raised money for charity, and she also spent a year writing a book called This Unseen Jungle which is available on Amazon, again with all proceeds going to charity.”

Keen to get involved and help himself, John mulled over a few ways he could fundraise, but settled on doing the thing he already knew he could do and do well, rebuild a classic, call in as many favours as possible, and in the end raffle it off, with all proceeds going to the MS Society

“I kind of felt useless. I was watching Florence doing these cake bakes, sitting up at the table for hours and hours writing the book to make a few pounds for charity and wanted to help. I’d been considering another bike build for a couple of years, but one sleepless night in bed I settled on doing one for charity.

“I got up that morning, messaged a few friends and contacts with the idea, and it kicked off immediately. I’m also lucky enough to run a small Facebook group called ACS, for old air-cooled Suzukis and the support was incredible. It’s become an extended family for Flo and myself.”

With a plan, albeit loose at that point, in place, John needed to find the right bike for the restoration. 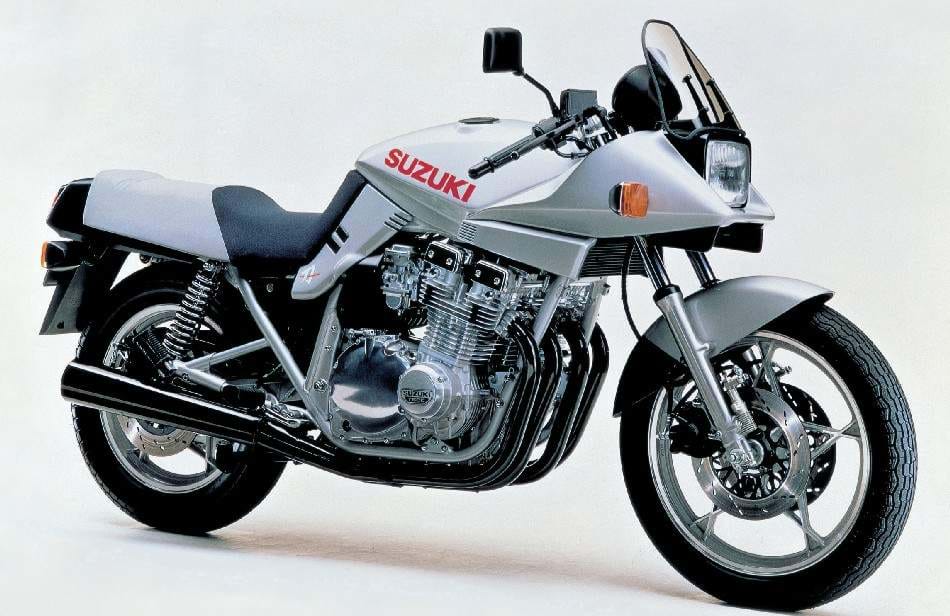 “I have been riding bikes since my 16th birthday, my mum had a blue AP50, and I’ve always had a thing for Suzukis, especially bikes of the 70s, 80s, and early 90s, so the plan was always going to be to restore something from that mould,” John tells us. “But when it came to settling on a suitable subject, it took some careful consideration. Mostly because I needed to ensure I could rebuild it cost-effectively, and also ensure it was going to be a desirable, valuable thing when it came to raffling it off.

“Originally I was keen on a GS750, as I’ve never restored one and I like them a lot. However, a good friend of mine had a friend with a GSX1100SZ Katana that he offered us for just £750. I snapped it up.”

With a goal set and a bike sorted, all that’s left is the rebuild, and the wheels are already turning, thanks to huge support from friends and family, and the various clubs John and Florence are involved with.

“The support has been incredible. When I started floating the idea about the consensus from everyone was to build it, because so many people offered to help. When it came to getting the bike back from Devon to Peterborough Max Mawdsley did it all in exchange for coffee and a slice of cake!

“Tony Garnham offered to carry out the full paint job, including the frame, Chris Crawford has offered to sort the wiring, Gary Bond is also servicing the forks for us, Brian McCall offered to do all the vapor blasting and coating on the motor, carbs, and wheels, and Jon Skelly offered to rebuild the engine. The generosity has been amazing.

“This is all born out of very unfortunate circumstances, but Florence has been so inspiring. At times she couldn’t write her book as her hands didn’t want to work. So instead she downloaded a voice activation app and carried on. She’s also writing it in French, so it can be released in France and raise more money. I hope this is my way of helping, too.”

You can follow the bike build, here, and we will be bringing you news of the auction, shortly.