Getting things right may well bring personal satisfaction. But occasionally, misjudging stuff and discovering you were mistaken can also offer reward. And so it was with my opinions on Suzuki’s latest GSX-R1000R.

I’d spent plenty of time on the firm’s superbike ahead of another three-week and 2,100-mile period together to suggested the experience wasn’t likely to be much of a mystery. But instead it had me say and think things I never expected to. As I pleasantly found out, this bike has way more going for it than just something to set impressive lap times on.

If I’m honest, the Gixxer wasn’t really what I wanted to use. The original plan was to go on something a bit less focussed, and only for a short time. These days, I’ve become more fond of ‘real world bikes’ offering greater comfort and practicality to go along with their strong performance. Stuff like the GSX-S1000, which I happily bombed down to Paul Ricard on a few years ago, are more in tune with my preferences. I’d certainly never entertain going as far as that on the sportier GSX-R. Or so I thought. 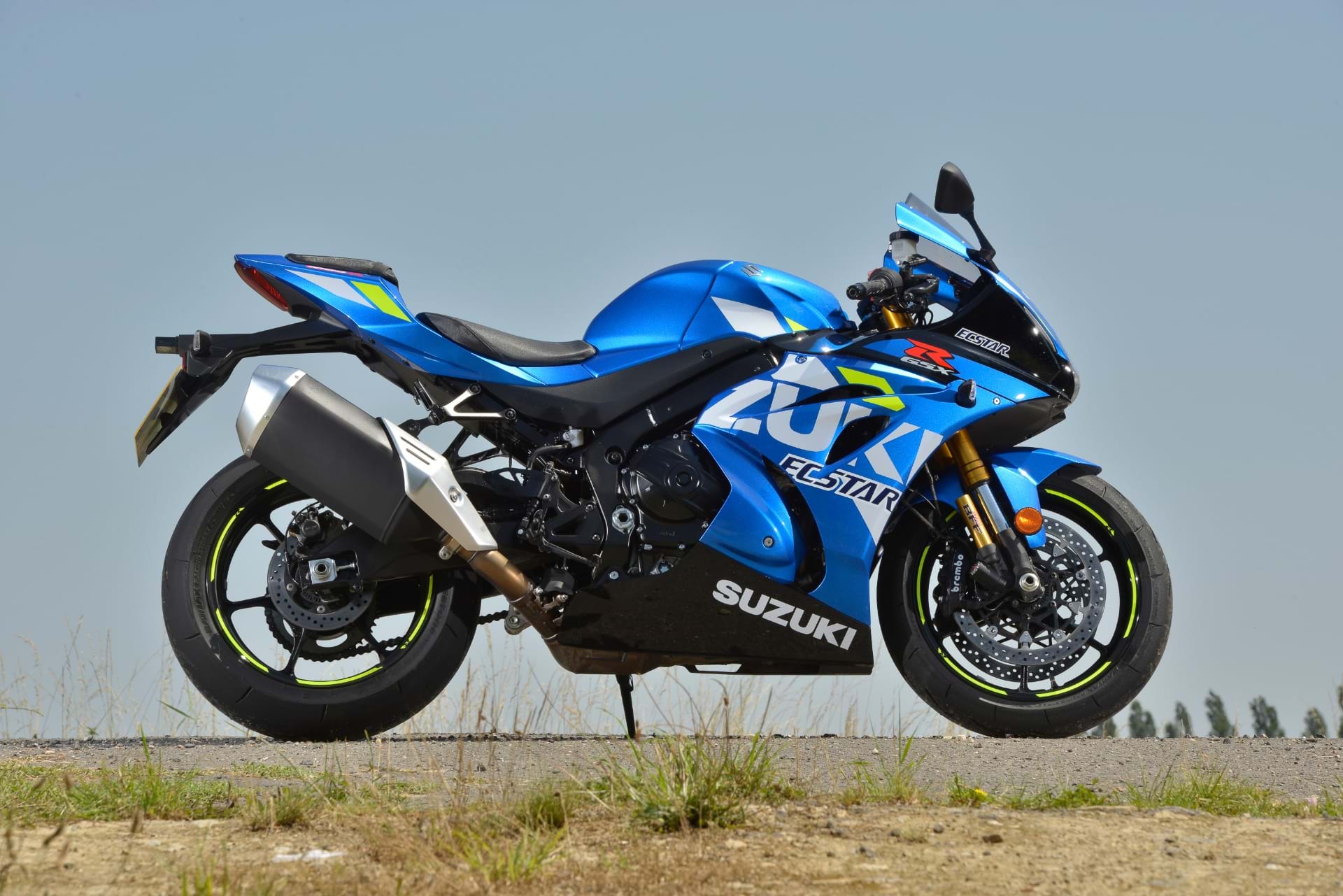 Opinion-shifting occurred within a single mile of clicking the Suzuki into first and whizzing away. Sure, it took just a few seconds to be reminded of the scenery blurring pace the exceptional motor can (and did) so readily deliver. But no, what generated such a distinct feel good factor was the reminder of the general brilliance of the big Suzuki, and just how special it feels as a package.

The light, fine control. The total composure. The instant response. And the absolutely fantastic overall precision and poise offered by this incredible bike gets right under your skin immediately. It’s instantly worthy. Instantly addictive.

Just as crucially, however, though the GSX-R may well be capable of thrusting you up to warp-factor pace in an instant, and represent the very finest in bike engineering, the admiration of the sensationally-sorted experience is something you very much appreciate even when you’re far, far below its absolute limit. I often hear people question the point of superbikes these days, and I’ll admit to (previously) having some doubts about them myself. But the fact is, the GSX-R1000R offers the sort of experience only machinery at the pinnacle of motorcycle production like this one possibly can. These sporting thoroughbreds are an absolute joy to ride at all speeds. They’re simply as good as it gets, and you don’t have to be riding flat out to realise it. 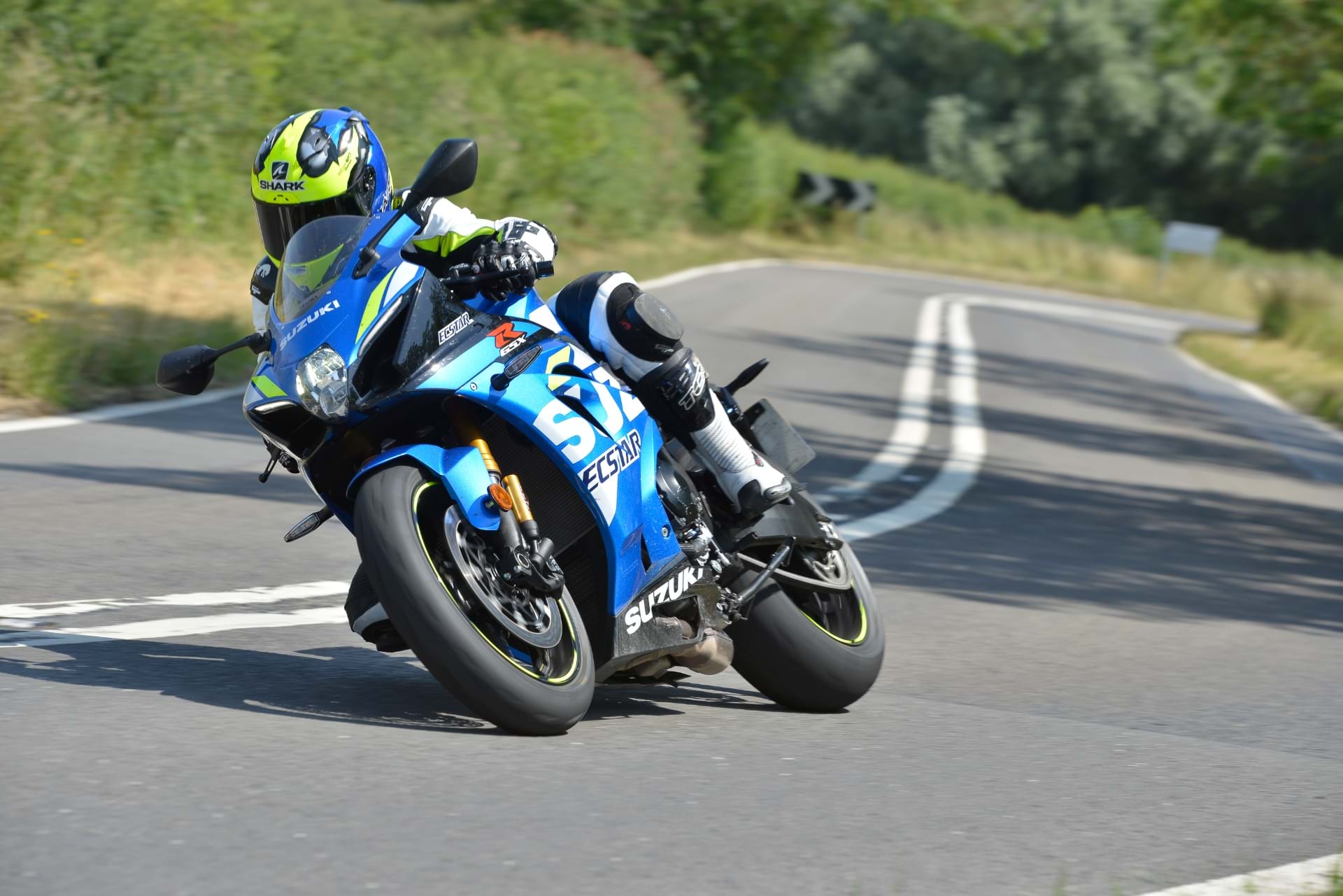 But if the first ride home on the Suzuki brought reminders of its staggering, invigorating performance, the following weeks spent with it brought lots of unexpected additional praise. It also had me end up in a few unscheduled destinations. The surprises first surfaced when I set off om a near 300-mile round trip to Wales. To begin with, just as it had done previously, the 1000 blew me away with its phenomenal pace, and just how easy it is to access. Clever trickery within the near 200bhp four cylinder motor means delivery of those horses is outstandingly prompt, progressive and linear. It’s so simple to get speed from. Be lazy and quick-shift your way through the box to top gear using less revs if you like, the pulling power is still hugely impressive and flexible. The combined effect of the MotoGP-derived variable valve timing, stacked inlet tracts, and torque-boosting exhaust valves drives you forward in an effortless and seemingly unhurried fashion.

But that’s just the start. Work the gears more, and hang on to the revs for longer, and things start happening so much faster. You really have to sample the crazily strong acceleration to believe it. I’ve ‘enjoyed’ the thrills of it all on countless occasions before, but it still takes my breath away every single time. Anyone who hasn’t sampled it will be totally bewildered by the magnitude of it all. And I am not exaggerating one bit. Your limbs and internal organs start becoming strained from the sheer force of the ridiculous speed gains. Suddenly you have to wave a white flag and change to up in an attempt to calm things down. But the drive’s so incessant, if you want to save your licence (not to mention your freedom), you have little choice but to roll off. I kid you not, what this motor can provide is hard to process. At times too hard. 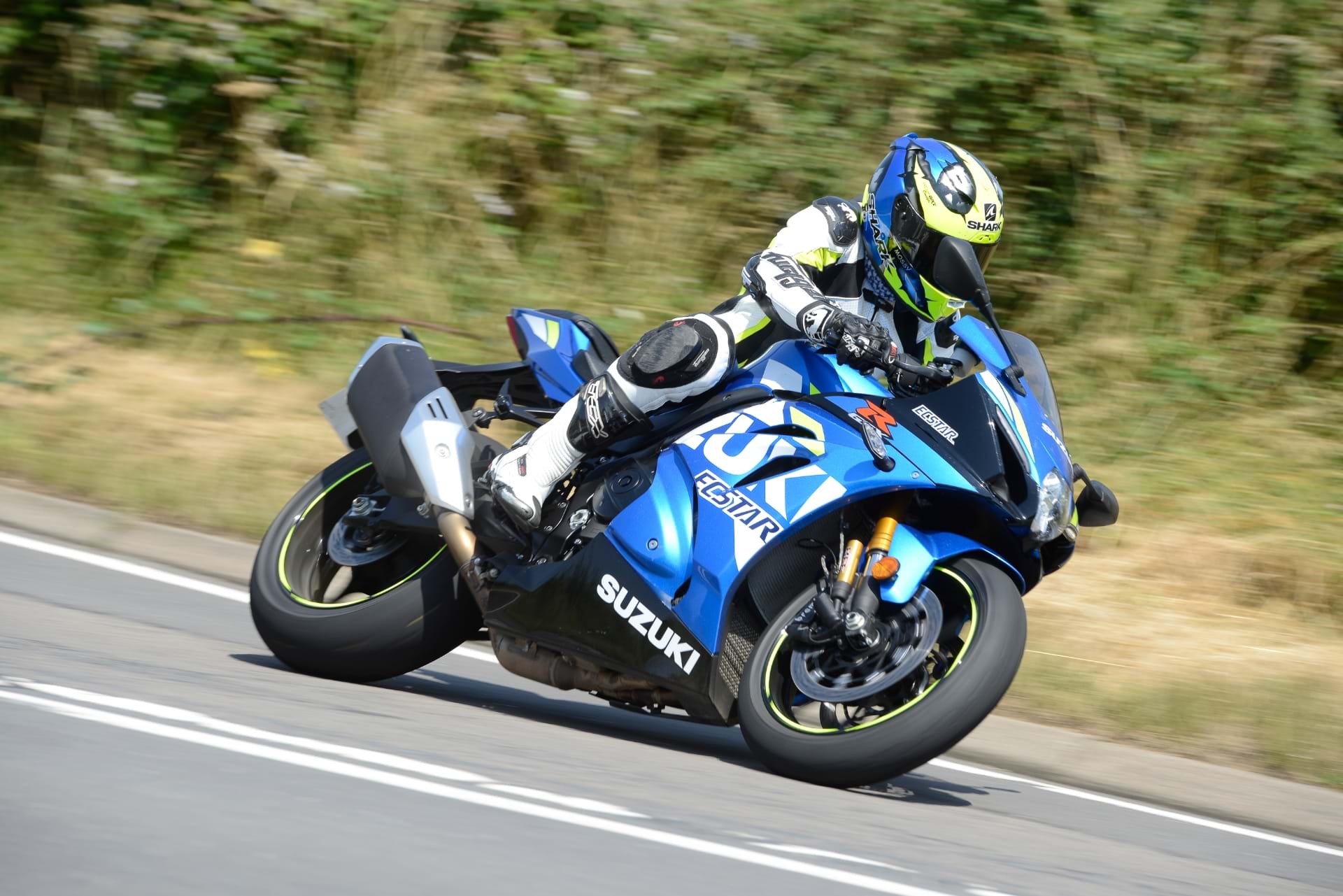 To prevent brain-fry, it’s essential to be more measured. Do that, and though you’re still likely to making seriously impressive headway, at least your head doesn’t hurt quite so much. It definitely gives you a better chance making more sense of things. Easing up also gives you time to appreciate the superbike’s other seriously virtuous features.

The Suzuki’s lightness is one of these key positives, allowing almost intuitive changes of direction. There’s no need to heave and ho to get this bike to alter line, you just think it, and the job’s all but done. Better still, and something I never really stopped raving about, is the superb steering. Seeming more like some laser-guided directional device, choosing a line and staying on it with pin-point accuracy is a given. It impressed me constantly, and even under braking and acceleration, it still guarantees getting you to precisely where you’ve chosen to head. Ensured steadiness supplied by the speed-controlled steering damper only adds to the certainty and excellence of the navigation.

There might be lots of praise to lavish on the GSX-R, yet by the time I’d got to Wales, two major surprises stood out. First was just how safe the superbike had felt. Despite its outrageous performance, which clearly has the potential to get you into very hot water unless you apply lots of discipline and moderation, the very same package that can create that excess, can also reduces risk. 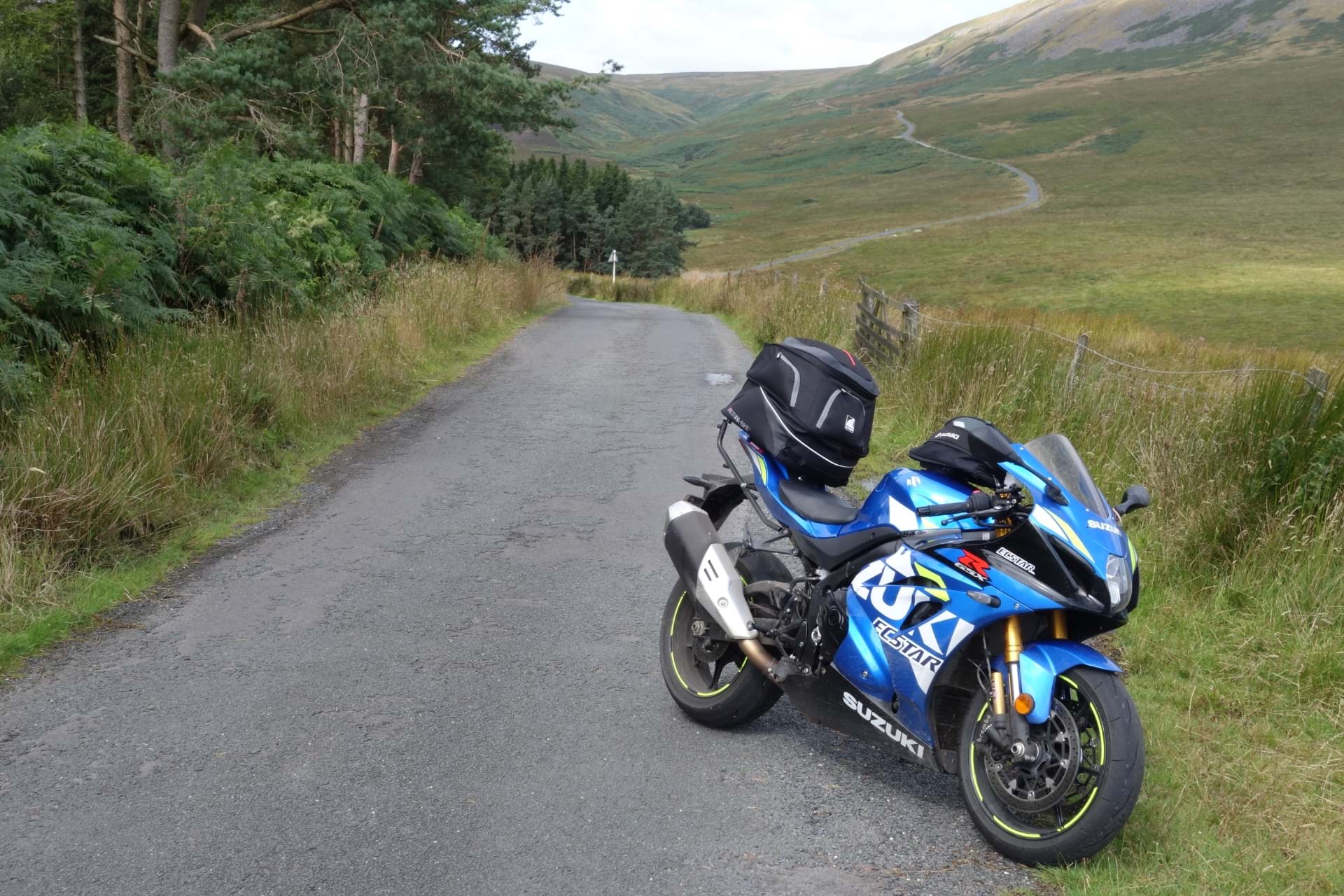 Control provided by the engine/suspension/brake/tyre combination is on another level to many bikes, letting you execute stuff like overtaking traffic and managing hazard avoidance appreciably more easily and securely. You feel so much more in tune with the Suzuki and what it’s doing, it’s almost like you’re wearing it, rather than just riding it. The connection is so good, and the feel and feedback so superior, it’s like you’re reading the road surface through your fingers like braille, rather than merely travelling over it remotely. It’s a really profound experience and something that makes the Gixxer feel so special, so thrilling, and so damned rewarding to ride.

But the other significant plus point I realised in Wales was living with the GSX-R is far more agreeable than expected, particularly from the point of view of comfort. There’s no doubt the footrest height isn’t exactly what you’d call touring-friendly, but combined with the tall seat height, leg room is generous enough. Given the comfy reach to the bars, decent level of weather protection from the fairing, plush enough seat, realistic tank range, and effective mirrors and steering lock, once I’d got home it was obvious to me this superbike isn’t just a one trick pony. I certainly considered longer runs well within its remit. I even quoted how suited I thought it would be to go to Scotland on. How prophetic that turned out to be... 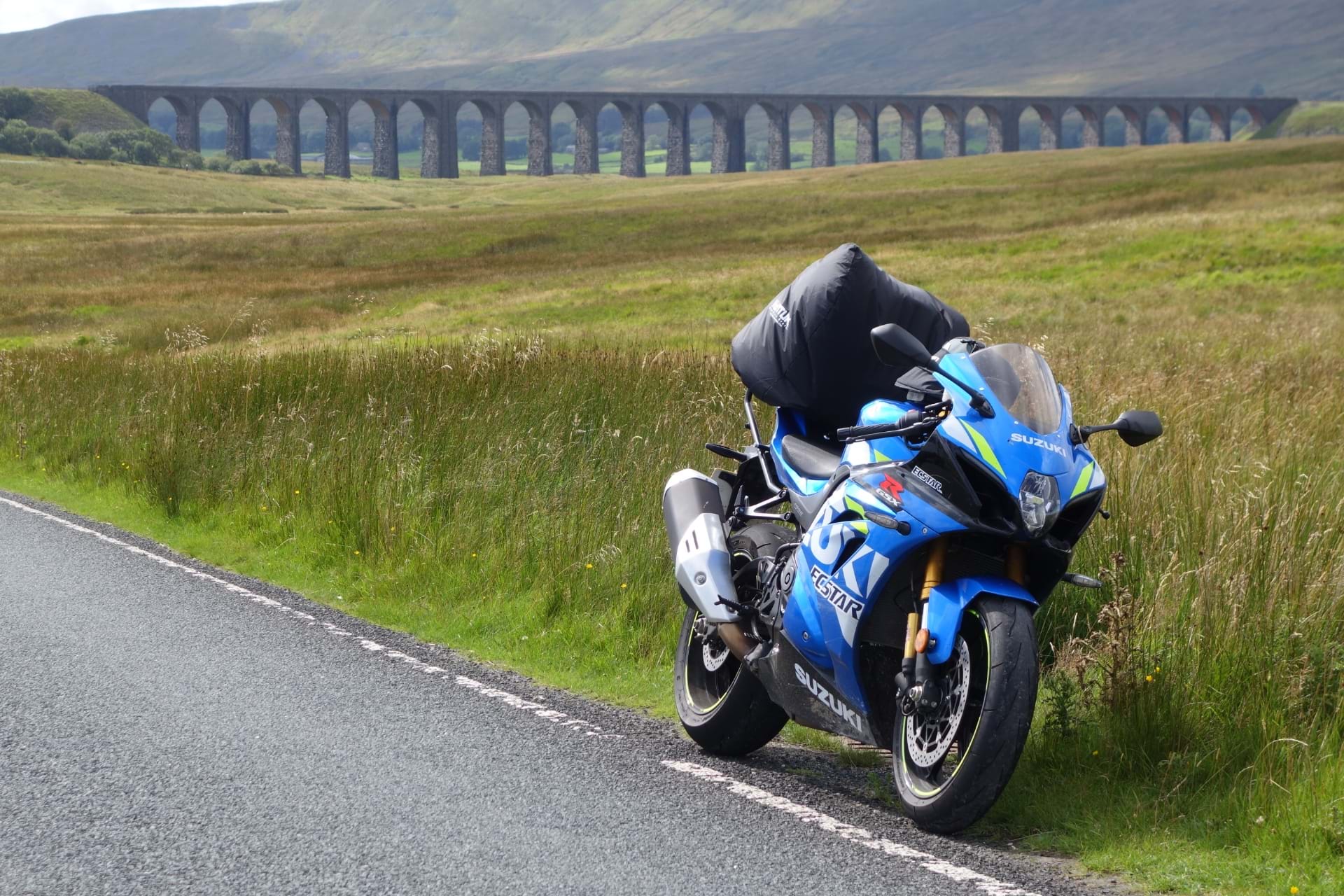 After marvelling further at the bike’s extraordinary performance – something you do on each and every ride at some point – the Suzuki's day-to-day ability started to become more and more clear. Whipping off for a 225-mile round trip to the Midlands presented no qualms, but then when a mate suggested a quick three-day tour of the Scottish Lowlands, I knew I was already armed with a more than suitable bike. To make the trip more civilised I took the precaution of fitting an excellent Ventura Evo-60 Jet Stream seat pack. Not only did it easily swallow all I needed for the jaunt, it conveniently clipped on and off in an instant. And just to be sure I added another 30 litres of capacity by taking a Kriega R30 backpack, a tough bit of kit with a clever harness design that effectively nullifies the effect of the weight of stuff I crammed it full of. Combined with a small Suzuki tank bag, I was definitely good to go far.

And so I did. Cirencester to a mate’s place in Manchester over the Peaks on day one proved easy. As did Manchester up to the super bike-friendly Buccleuch Arms Hotel in Moffat, Scotland the following day. Then it was off to the Lake District for a night in another mate’s caravan, and back home to Gloucestershire after that. Proving more than capable at virtually all times during the mini-tour, the GSX-R showed just how much more versatile it is than I’d ever expected possible. It even did around 50 mpg when I took it easy. Obviously it didn’t handle in quite the same flickable way it did without the luggage, but it wasn’t handicapped by the appendages as much as you’d think. I walked in the same fluid way at the end of each day as I’d done when I started, and never felt an ache or twinge throughout.

Overall the Suzuki scored very big points. Its staggering performance didn’t surprise me one bit. But its ability to cope with covering ground did. As did the superbike’s ease to live with on an everyday basis. I thought my time with superbikes was over, but the time spent on the GSX-R1000R proved that’s far from the case. I naturally expected I’d be thrilled by its speed, but little more beyond that. The reality was different and I’m really glad I got to appreciate all the other numerous strings it has to its bow.

It’s a hell of a bike, and in a lot more ways than I’d imagined. I’ve not been as glad to be wrong about something before as I was about incorrectly assessing the GSX-R1000R’s perceived portfolio. Obviously a classic case of (mis) judging a book by its cover, I guess.