History of an icon: the Hayabusa story
HISTORY OF AN ICON:

There aren’t many more iconic and immediately recognisable silhouettes in motorcycling, and the GSX1300R Hayabusa wowed the two-wheeled world when it was launched in 1999. We’ve taken a look at its origin, the revamps, the stories, and the launch of the third generation.

'Suzuki Sets New Standards' read the headline in MCN following the launch of the first Hayabusa at the Circuit de Catalunya in 1999. The design brief was simple; wade into the hypersport motorcycle market and come out on top. And the Hayabusa (which translates to peregrine falcon, a bird of prey which has a top speed dive of 200mph and preys on blackbirds - geddit?) did just that. 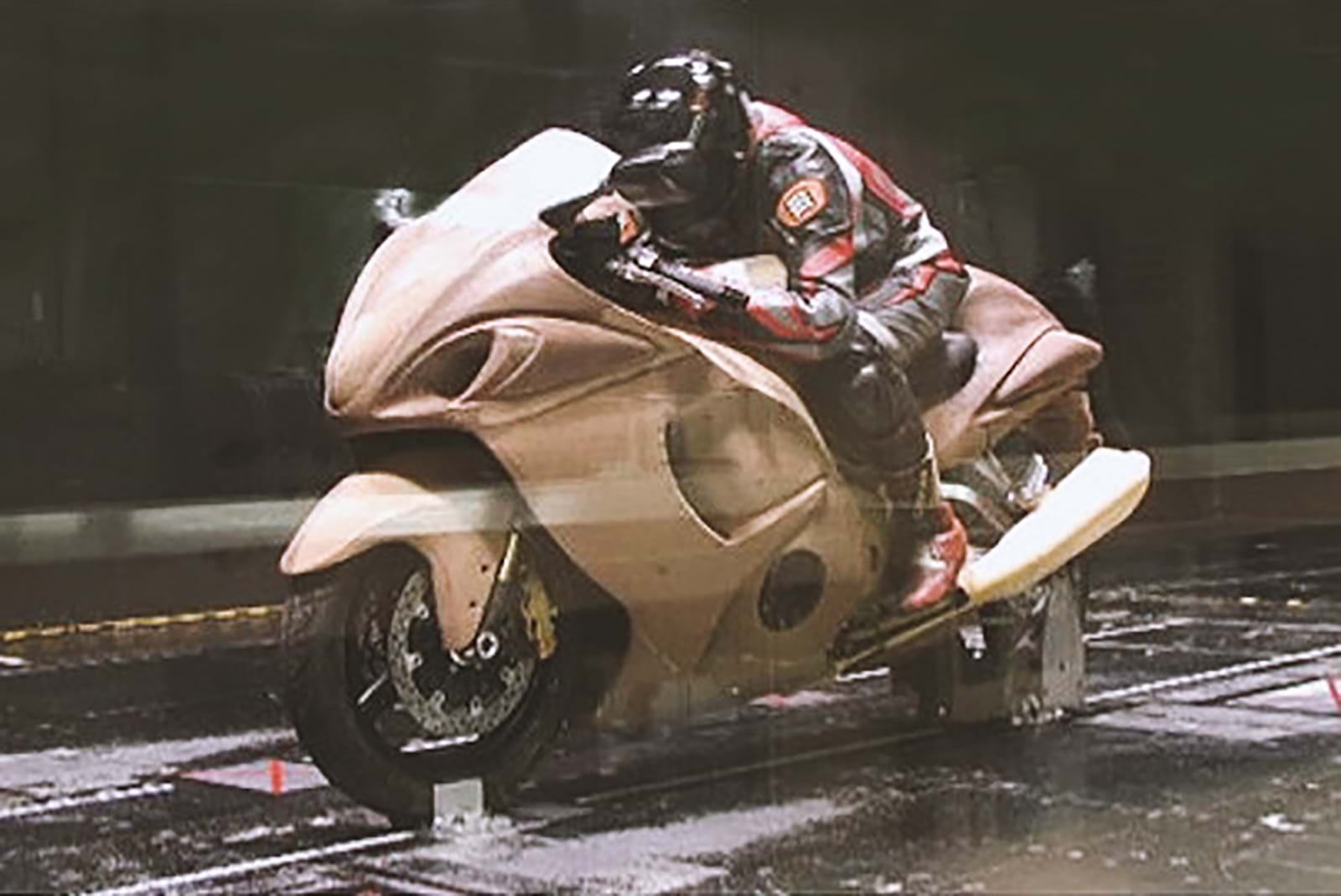 Styled and designed to a purpose, the Hayabusa made an impression the moment you clapped eyes on it, with its flowing lines aimed at making it as aerodynamic as possible, allowing it to cut through the air with ease. And at the launch in Spain, every superlative imaginable was thrown in its direction, with the assembled press running out of ways to describe just how jaw-dropping it was.

Head of design on the original project was Yoshiura san, who described the idea he set out to achieve, saying, "The concept of the first Hayabusa was to create an original and dominating impact with superior aerodynamics, as well as being the most powerful sports motorcycle. I designed it with the intention of getting attention, using a unique motorcycle design. It needed to be the ultimate road-legal motorcycle with the highest performance from mass-produced bikes." 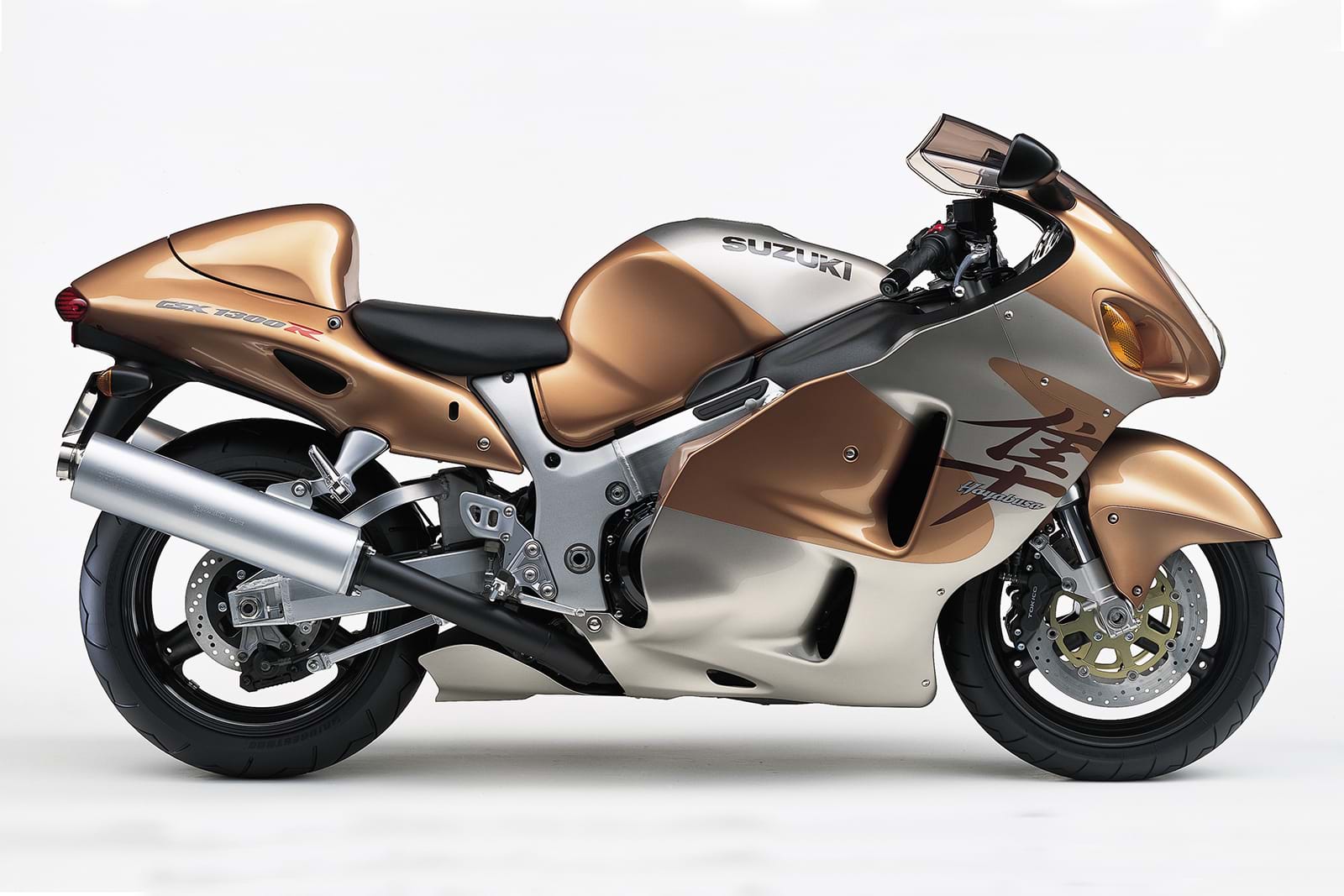 It was immediately heralded as the fastest production bike on the market. At the launch, top speeds were clocked at the same point on the track as they were for the 500cc GP race the year before, with the Hayabusa just five miles an hour slower than the quickest prototype racer of the day, bike at the same point of the straight, and it wasn't flat out. Journalist Chris Moss described the speed and acceleration, saying "At 7,000rpm your arms feel like they're about to be wrenched out of their sockets." And to cope with the power, Bridgestone developed a set of brand new tyres, the BT56J, which gave the Hayabusa a greater contact patch when leant over and greater stability at high speed.

Suzuki test rider, Yuichi Nakashima, said of the first Hayabusa, "I can say the Hayabusa's engine feels so overwhelmingly powerful and finely tuned that there is nothing like it. After riding it you won't want to ride another motorcycle. Just once experience the Hayabusa's powerful acceleration from low to high speeds and its nimble handling and you too will be hooked."

It wasn't just the phenomenal power that the bike was praised for. The smooth, 1299cc inline-four cylinder engine provided masses of torque, making the Hayabusa more than just a road-legal missile, but a user friendly, real-world motorcycle, capable of shrinking continents. Bike Magazine's Martin Child reported from the launch, "You will not find a more torquey, rider-friendly engine. I completed two laps in top gear which saw everything from 30mph hairpins to the freedom of the straight and the bike pulled cleanly. The torque was instant and free-flowing.”

It was happy cruising at motorway speeds on long-distance trips, or on the casual Sunday ride out. And it handled too, with the chassis and agility the other key areas where the Hayabusa scored highly. 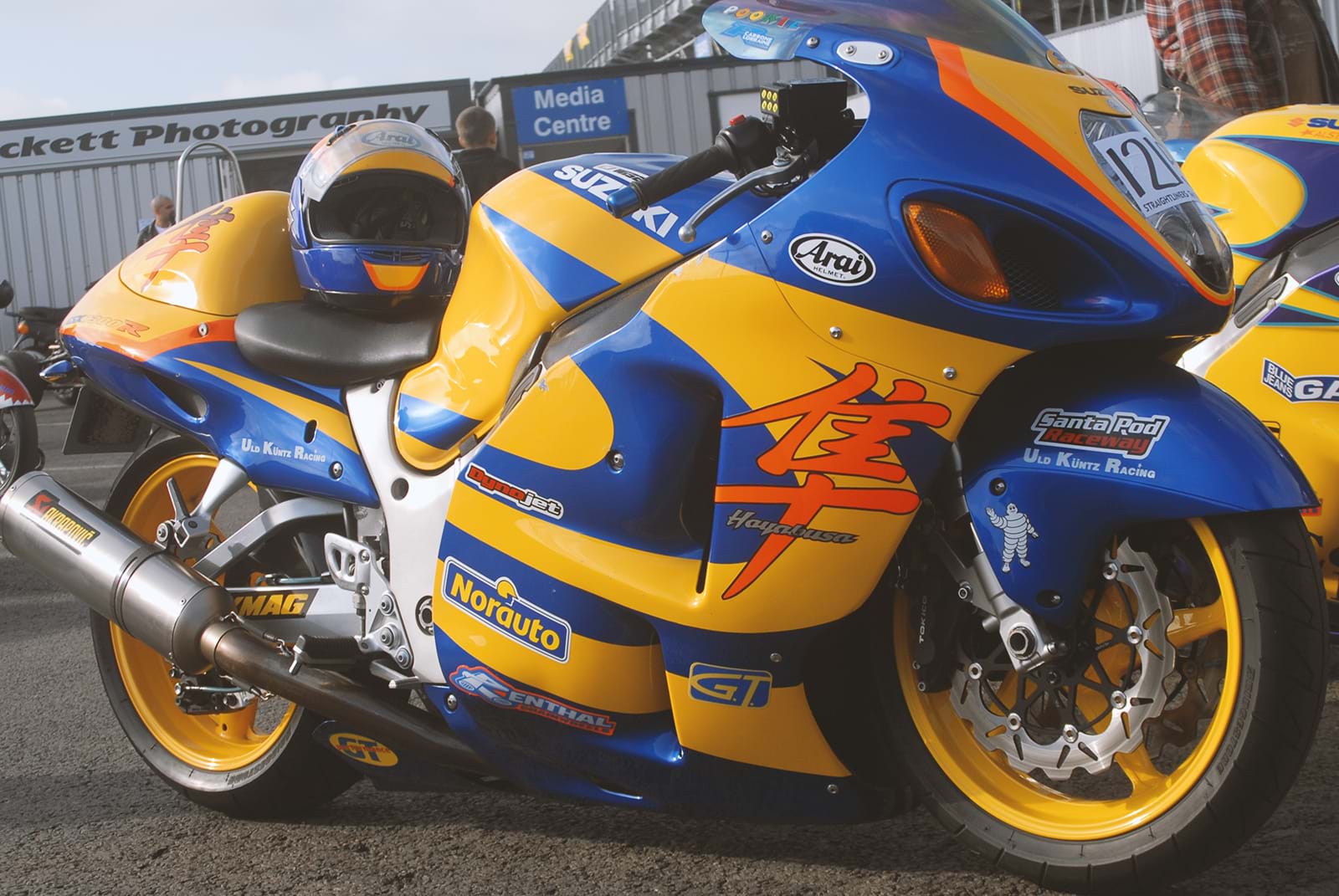 It became an immediate hit and cult status followed, with the Hayabusa becoming an icon. It was, and indeed, still is, the weapon of choice for top speed chasers, while drag racing strips became its second home. It also leant itself readily to customisation, with a number of people choosing to personalise their Hayabusas.

Jack Frost, who operates Holeshot Racing, has spent years chasing top speed records, as well as using his expertise to help others. But he's done both on Hayabusas more than any other model.

"When the Hayabusa came out in 1999, I got one straight away," Jack explained. "I rode it standard to run it in and it was a great bike, as I have always said to people over the years. And they handle better than people would think; so easy to ride fast and eat up the miles. But it was by far the most powerful stock bike I had ridden and the obvious choice of bike to transform into a turbo bike.

"After a few months fettling mine, we managed 350bhp and a top speed of 228mph, still on pump fuel and a lot of standard components. After a few more changes we ran 257.4mph on the mile. It quickly caught on that turbochargers were a recognised add on for Hayabusas and at Holeshot Racing we sold hundreds of turbo kits around the world.

"But the 'Busa has such a great engine, as Suzuki are renowned for, and this shows by how long the model ran without change until 2008." 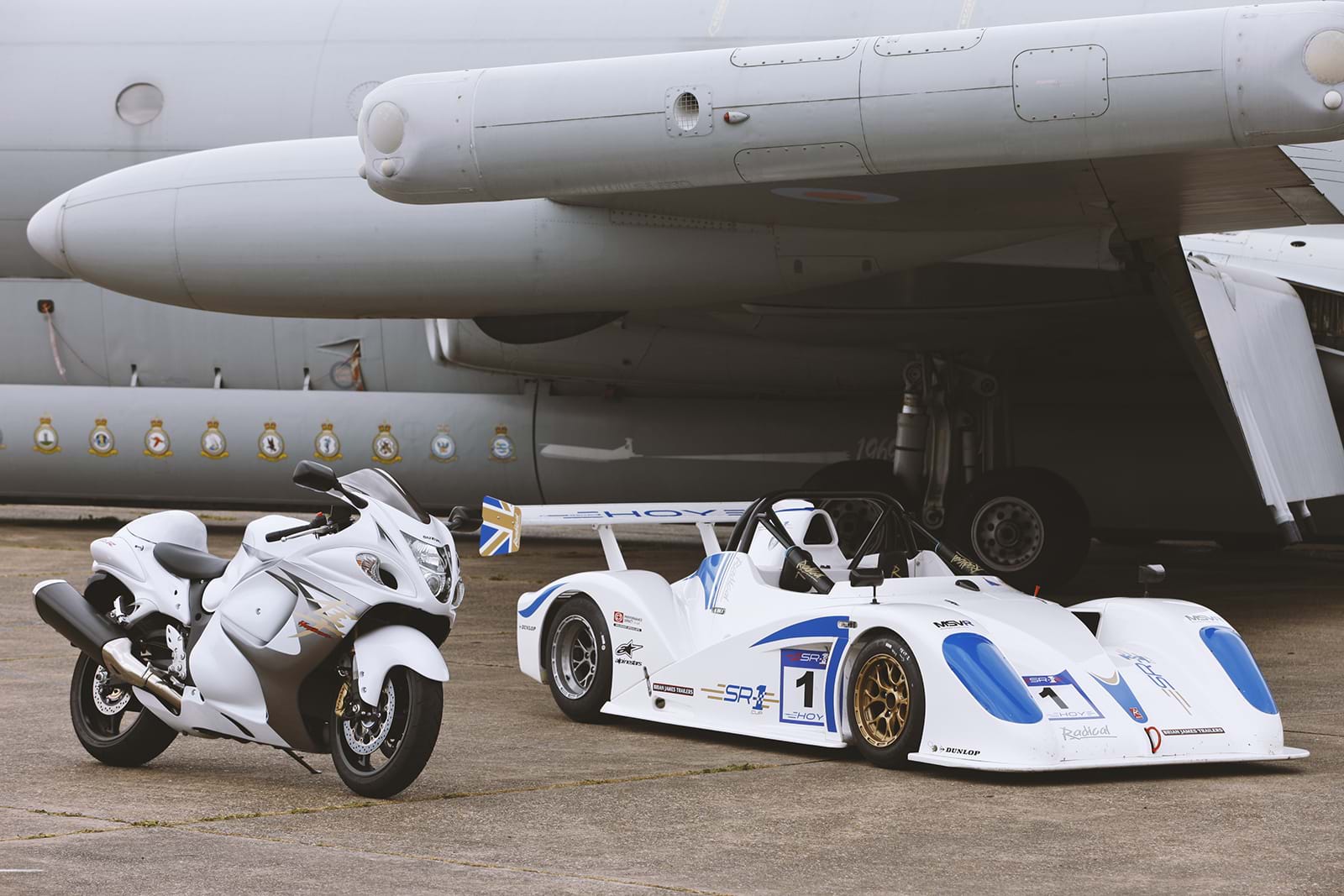 Also testament to the strength and power of the Hayabusa power plant is the long standing relationship that Suzuki GB has formed with sports and racing car manufacturer, Radical. Since 2000, Radical have been using Hayabusa engines in a wide range of their sports and racing cars, including building a Hayabusa-based V8 engine, which features in the SR8 RX race car.

As for the customised scene, that took off nowhere more so than the United States, where the Hayabusa elevated itself to the top of the fashionable motorcycle list, also proving popular with music artists and sport stars. The instantly recognisable bodywork, extensive list of aftermarket parts and interchangeable Suzuki components, plus the silky smooth, powerful and easily tuneable engine meant it was the motorcycle of choice for custom shops up and down the USA, serving as a rolling advertising board for the potential of the custom builder.

Apart from an upgraded ECU, revised fuel injection settings and front suspension, it went relatively unchanged in the early years, until a radical overhaul on the 2008 model.

But, launched in September 2007 at the Salzburgring in Austria, the Hayabusa was back with a bang, eight years after the original made its debut in Spain. Updates included a stronger and more powerful engine, which increased the displacement to 1340cc, with new lighter and stronger engine internals and a redesigned gearbox and a broader torque throughout the rpm range. And to deal with the extra heat and power, and new, curved radiator helped keep the engine cool.

The newest 4-into-2-into-1-into-2 exhaust system featured a new oxygen sensor used by the engine management system to increase combustion efficiency by adjusting the amount of fuel injected into the cylinders, and  wind tunnel testing for the 2008 model centred around design refinements aimed at redesigning wind protection for the rider, while remaining true to the original design and iconic styling. Wind flow over and around the rider, both when in a normal seating position as well as when completely tucked in was improved. There were also changes to the front and rear suspension, brakes, frame, and wheels. 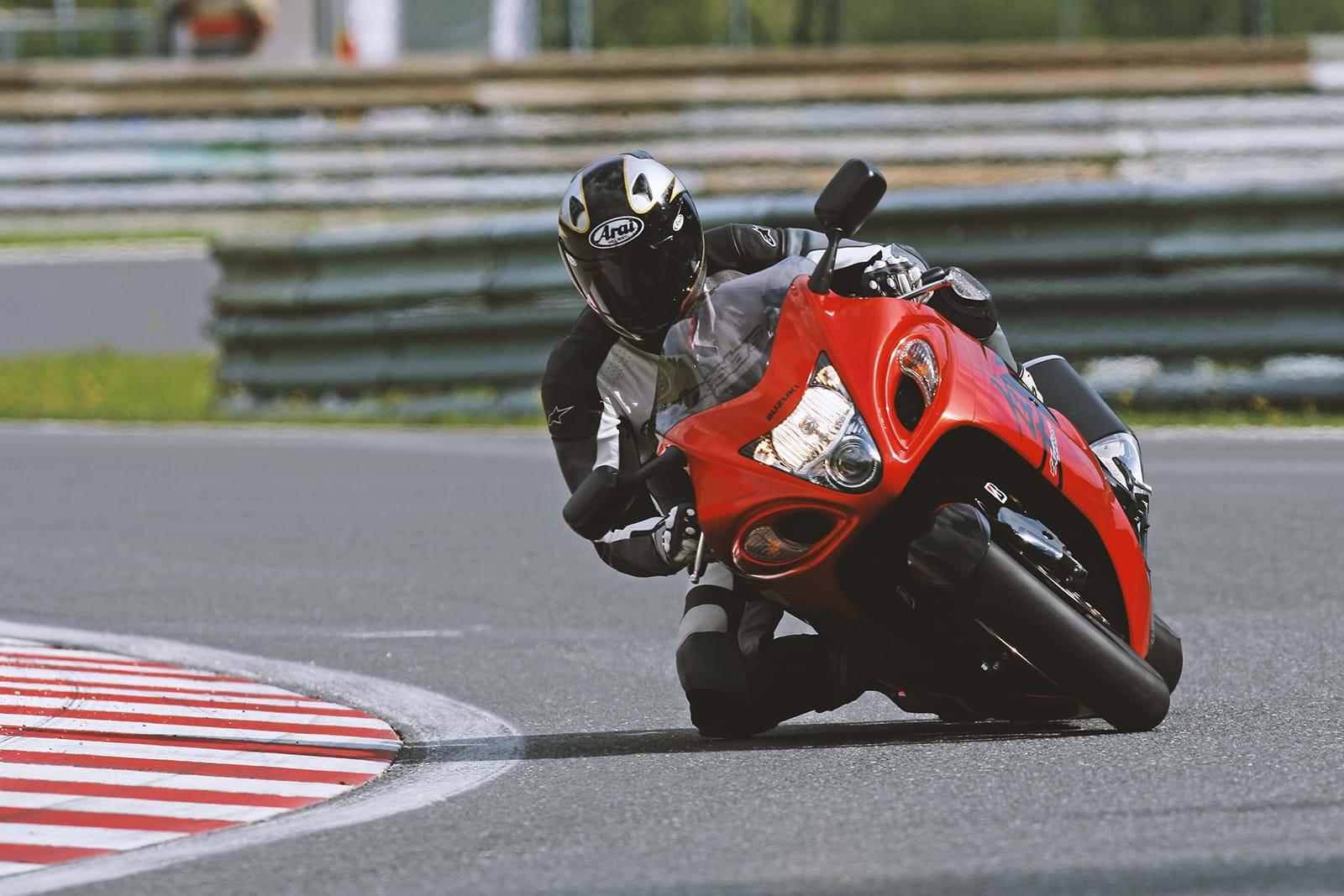 It was immediately heralded as the 'rebirth of a legend' by MCN, with senior road tester at the time Adam Child writing, "The word 'legendary' is over-used. So is 'iconic'. But both typify Suzuki's Hayabusa."

Chief engineer Hiroshi Iio worked on the engine of the original Hayabusa, before being made chief engineer for the overall project. "When we were refining the design for the second generation, the team placed top priority on improving its already legendary aerodynamic efficiency. The Hayabusa really stands above and apart from other ultimate sport bikes, and its consummate form follows the function of the bike’s aerodynamic characteristics. Plus, its optimal balance and motion control translate into the ease of handling that you experience when actually riding the bike."

The Salzburgring was the perfect track for the relaunch of the Hayabusa, with two long straights, flat out kinks and fast corners. And nearly 10 years after the original model wowed the assembled motorcycle press, here it was, at it again. Bike Magazine's Simon Hargreaves agonised over finding a flaw in his report, before conceding that, "the 2008 Hayabusa has me stumped because I honestly cannot think of a single thing wrong with it." After it's introduction in 1999, it was back to reaffirm itself at the top. 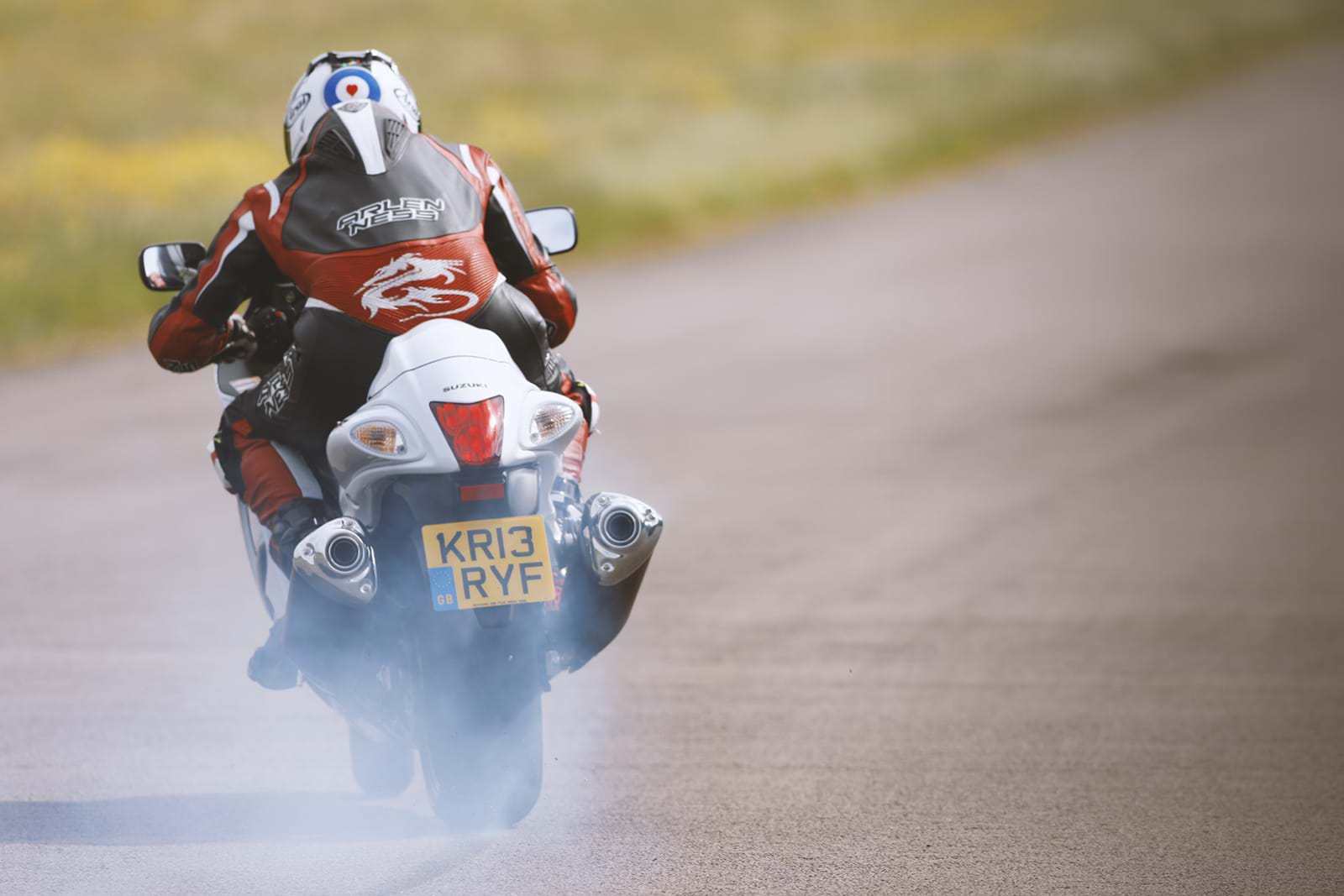 As GSX-R1000s and GSX-R1000Rs moved the supersport game on, with faster engines and superior handling, the Hayabusa’s place moved further into high speed comfort. Already a string in its bow, the Hayabusa was the ideal tool for swallowing huge miles in speed and comfort, with assured handling and performance.

But with tighter emissions regulations coming into force, the Hayabusa disappeared from European model ranges after 2018. 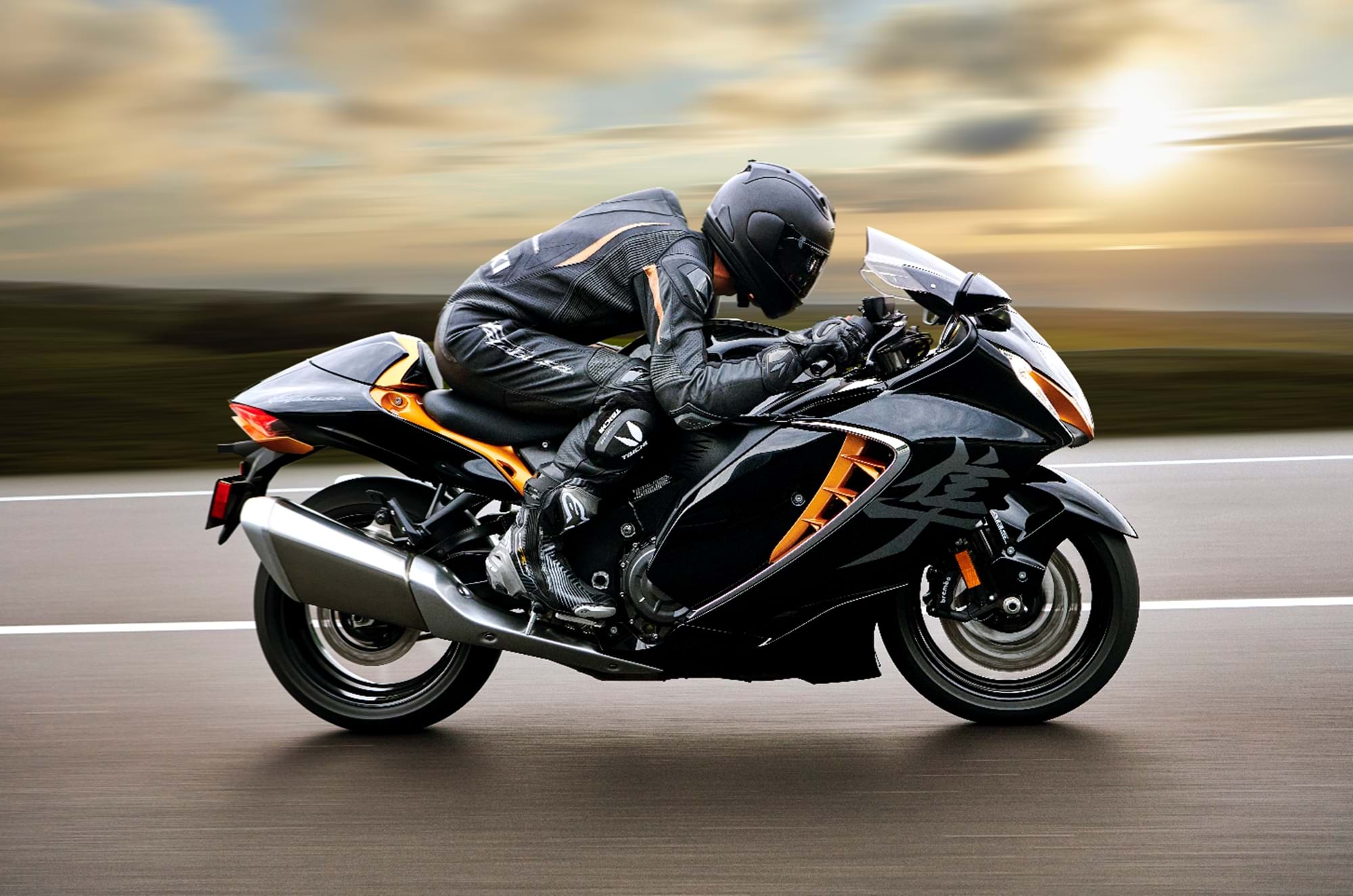 But in February 2021 a new version was announced. The third generation Hayabusa was here, retaining everything that made it so good, and getting updates to make it even better.

Since the Hayabusa ceased to exist in Europe, the motorcycling landscape has changed, not just from the standpoint of stricter emissions regulations, but also a market place. The Hayabusa's need to keep chasing peak power figures was no longer there. Instead, the focus was on thrust. 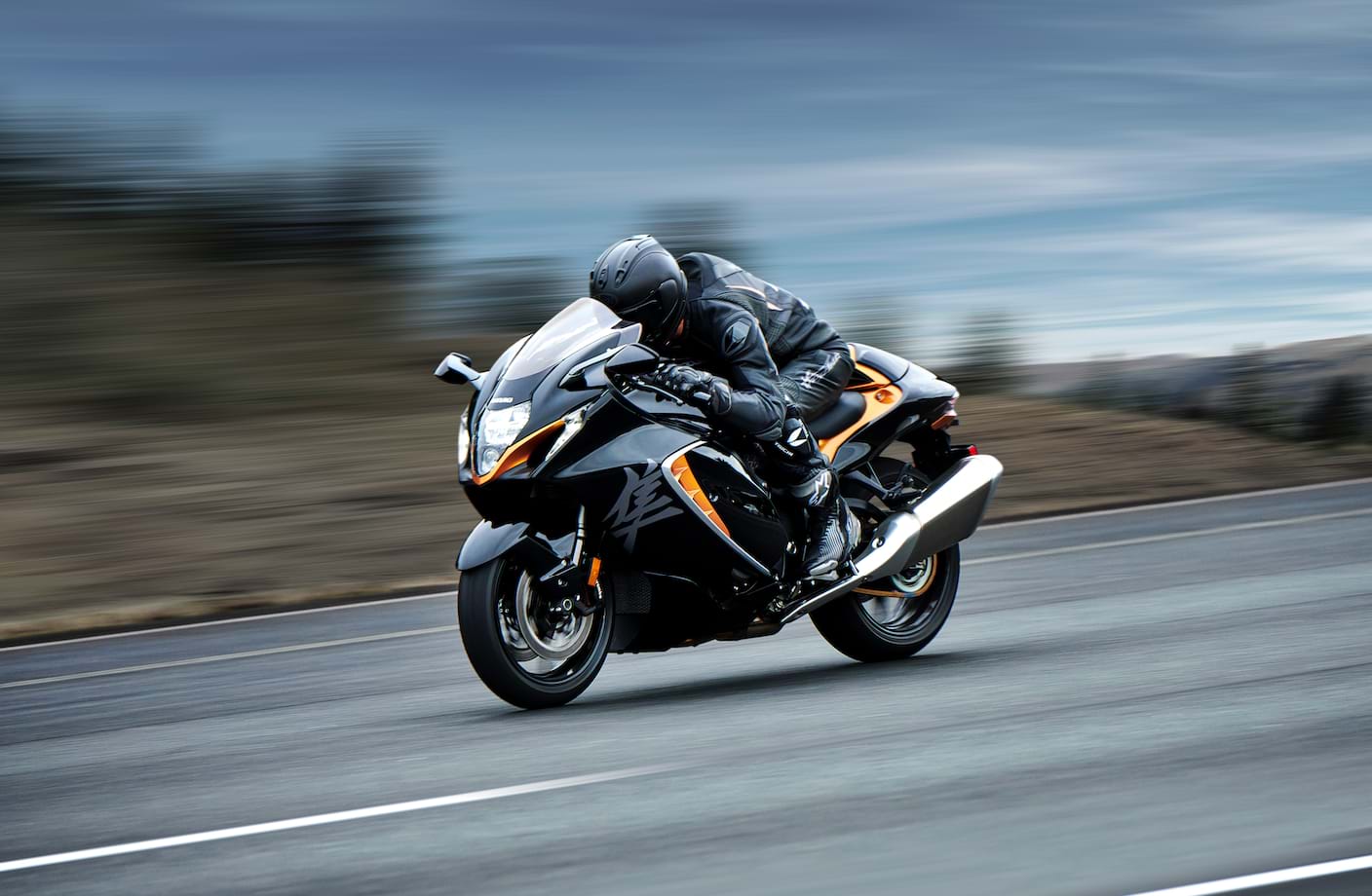 While litre sports bikes push out more peak power, even grunty GSX-Rs can't compete with the Hayabusa's shove at the bottom end, and the third generation Hayabusa has an even fatter torque curve, providing a wider spread of power in the lower rev ranges, which makes building speed effortless.

The biggest change, however, comes in the electronics department. A sophisticated suite of electronics means the new Hayabusa has everything you could want or need to cover ground quickly and in comfort. But it also stops short of technology for technology sake, meaning that it could be launch with an RRP of £16,499, too, ensuring it remained an awful lot of bike for relatively little money.

Added together it means the Hayabusa story continues, and another chapter will be written.

For more information on the new Hayabusa, click here.