It’s hard to pick one word to describe the SR75 World Team Suzuki outfit, but on the shortlist is definitely busy. The multiple Arenacross Championship-winning team was again in action for the UK’s indoor series at the start of the year, and since then hasn’t come close to slowing down. We popped in for coffee and a catch up at the Wimborne HQ to see what’s been happening, and what’s yet to come.

Also on that shortlist of adjectives is professional. Team boss Geoff Walker is a stickler for detail and for doing things properly when it comes to both the preparation of the team’s RM-Z machinery for any upcoming competition, and also the working environment back at base. You’d be happy to eat your dinner off the floor of the immaculate workshop.

On the bench is the RM-Z250 Valentin Teillet raced in this year’s Arenacross Championship. The Frenchman finished second in the Pro Lites 250 class, while his teammate Charles Le Francois also finished runner-up in the Pro 450 class. However, the pair helped SR75 World Team Suzuki lift another team title, an accolade the team has won three times in five years. 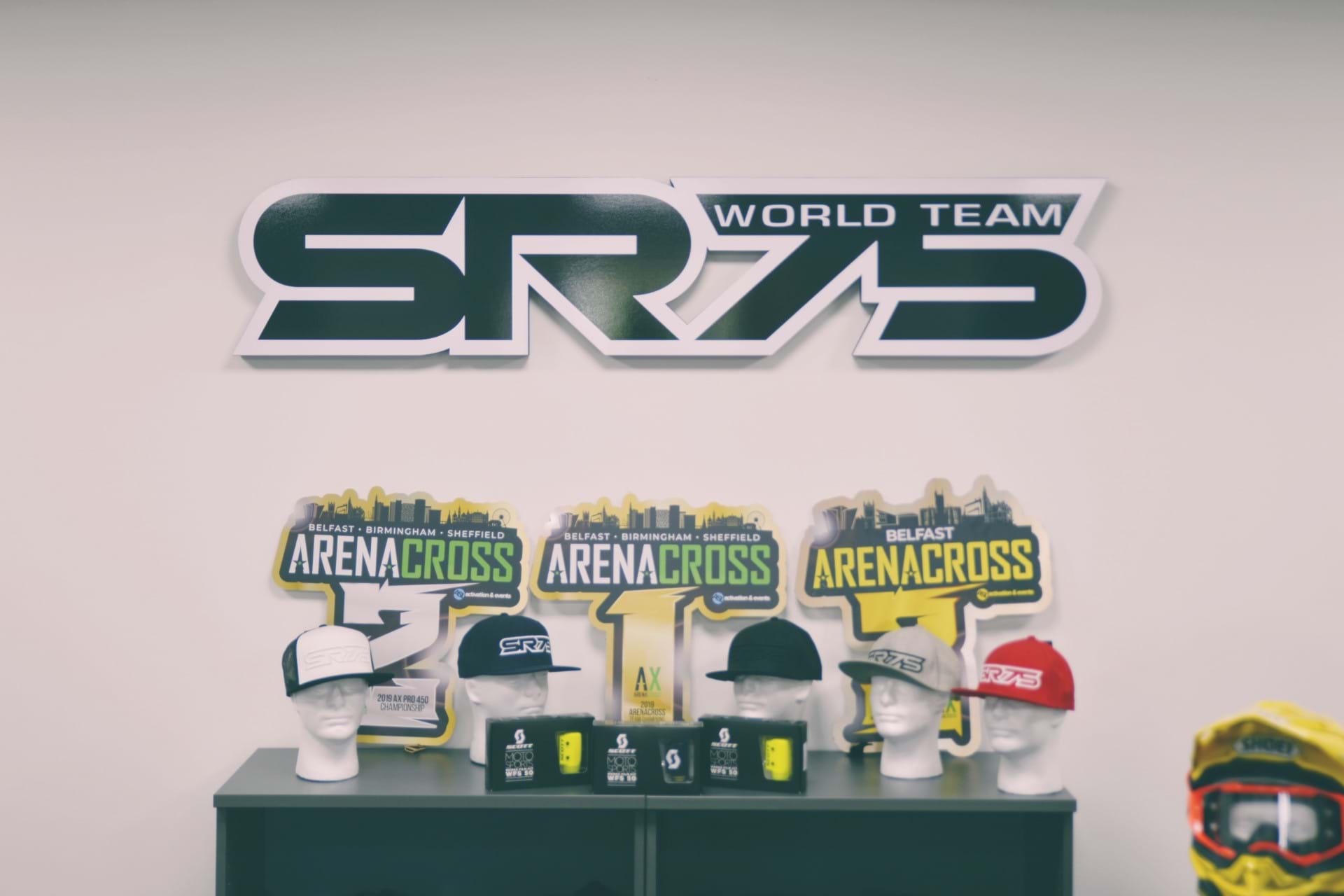 “The AX Pro Team Championship is incredibly important for me personally,” Walker says as we walk past a display of accolades, including this year’s gong. “We pride ourselves on our teamwork; it takes good people with good attitudes to build great race bikes for our riders, and without them, our sponsors and the fans those riders don’t win the individual trophies. It takes a good team to deliver on all fronts.

“This year’s AX team championship went down to the wire and the emotion of winning it at the final round of the tour was amazing for us and Suzuki. We had to come from behind after some bad luck and these titles mean the world to us.”

It was a new-look for the team for this year’s Arenacross Championship. Thomas Ramette won three titles back-to-back on SR75-prepared RM-Z450s in 2015, 2016, and 2017, and narrowly missed out on the 2018 crown by three points to Suzuki-mounted rival Cedric Soubeyras, but he was sidelined for the 2019 series through injury. The team were also without long-standing rider and Arenacross stalwart Cyrille Coulon, who retired at the end of 2018. 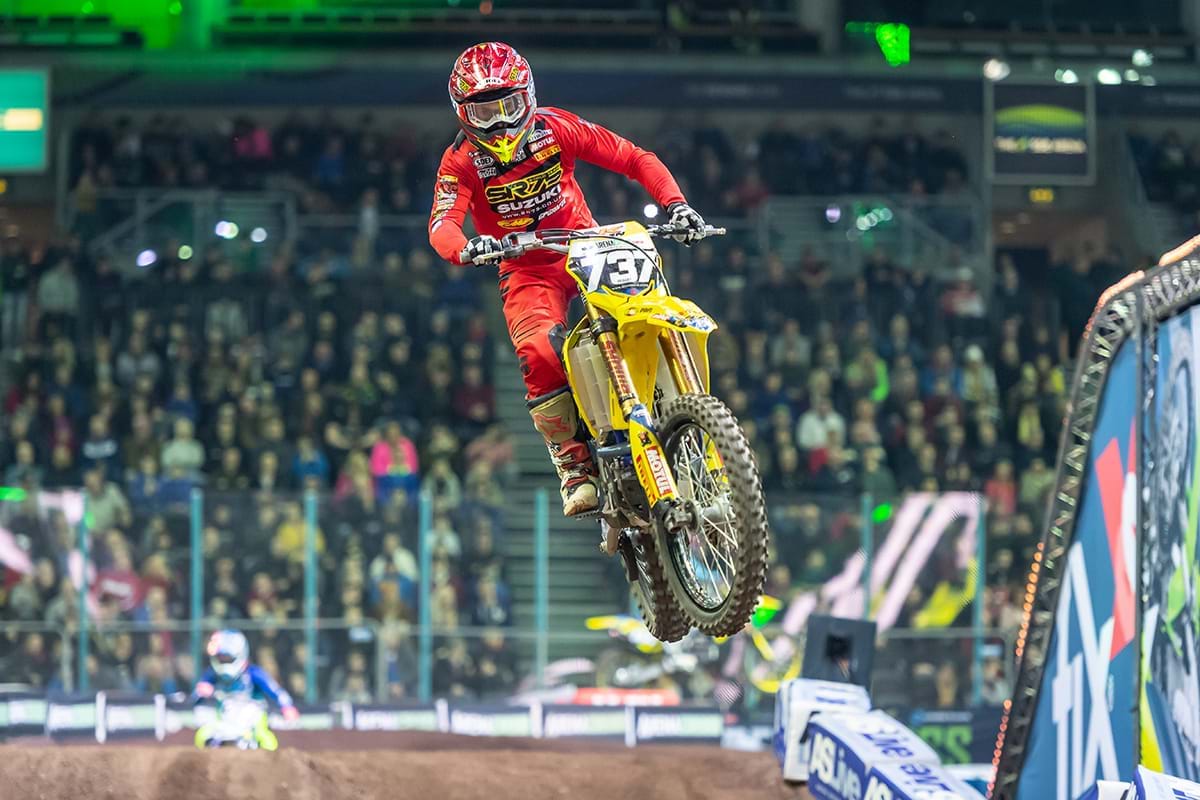 Teilett in action during this year's AX series

“For this year’s series we had to find some strong replacements to fill some very big shoes. Charles [Le Francois] had been on my radar for a while as a top Pro Supercross racer who always gives 110%, on and off track, and we signed him pretty swiftly to race our RM-Z450.

“It was quite a bit later in the day that we signed Valentin [Teillet] to ride our RM-Z250 in the new Pro Lites class, but both he and Charles slotted into the team well and gelled quickly with everyone.”

Despite winning the AX team championship this year, it was one of the more difficult tours for the team: a combination of getting the new recruits settled and comfortable on their new bikes and some good old fashioned bad luck that comes with the close racing Arenacross throws up. “We worked really hard to have a good series, but it was not without its challenges, Walker explains. “Valentin was getting his first experience of the intense level that comes with Arenacross and we were working on finding a good setting and a good feeling for him on the bike. That work was made harder when he crashed heavily at round one.

“Charles also had his share of bad luck - at Belfast he was leading and certainly on for a podium when he was taken clean out. He finished 10th in the end but that put us further on the back foot.

“But we all kept working and the speed the guys showed was awesome and at times in a different world. I was proud of them both for recovering throughout the remaining rounds to battle to second place in their respective classes, and extremely grateful for the effort they put in to help us lift another team trophy after it went down to the wire and we had to come from so far back.” 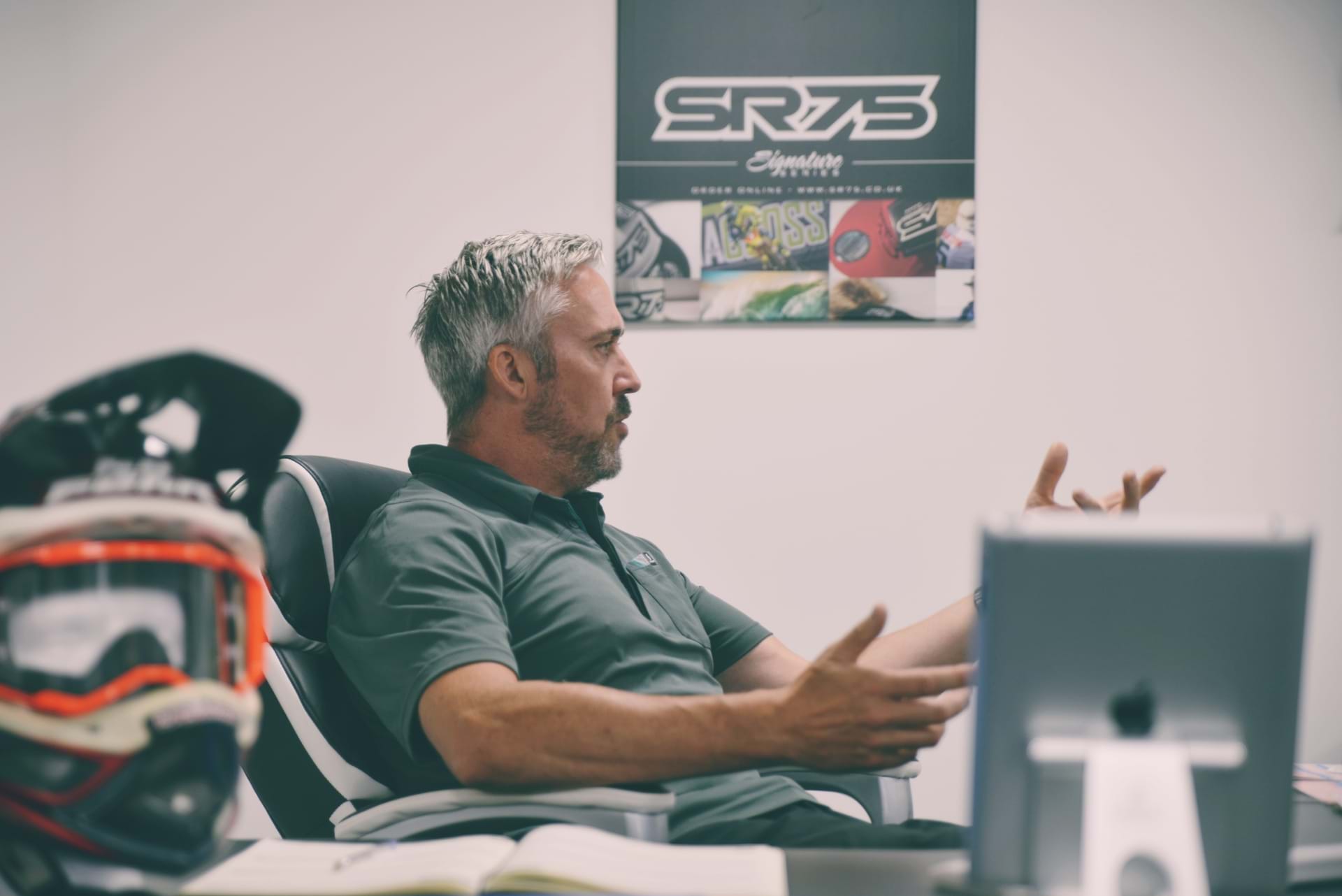 Walker at the team's HQ

The end of the Arenacross tour did not signal the start of a rest period for SR75 World Team Suzuki. Instead, in its full-gas, flat-out style, Walker’s outfit packed up and headed Stateside for a crack at some AMA Monster Energy Supercross.

“It was great to get the SR75 name back in AMA Supercross, and I’m so grateful for the support from Suzuki USA and the JGR Suzuki team. But more importantly it was great to get Charles out there and make his first ever 450 Supercross main event. It’s the biggest SX championship on the planet, with the best teams and riders, and we were able to go out there and appear in three main events from the four rounds we attended - when everyone else is already well dialed in with setup and experience - and score championship points.

“It was obviously a great experience for us as a team, but I also think it showed the level we’re able to achieve as a UK-based team with the RM-Z450 - to go out there and fight and race against the best in the world.” 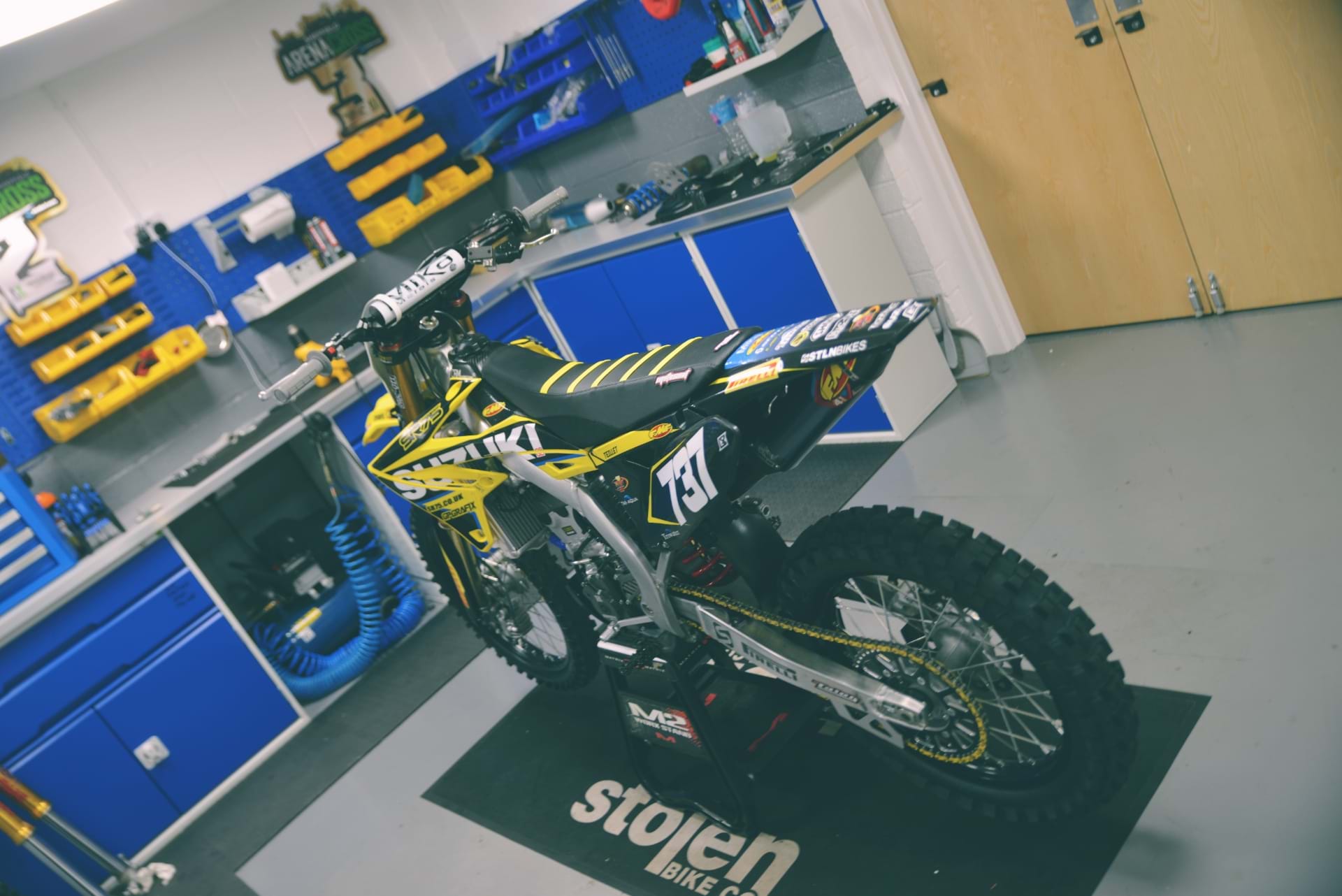 After the series finale in Las Vegas, there were just a couple of weeks to catch a break, before the start of the European season. Le Francois and the team are taking on the French SX Tour, the Hexis Pro Supercross tour, plus the international meetings in Paris, Geneva, and Barcelona. There will also be wildcard appearances in the French and British motocross championships, too, but plenty of Walker’s time is also taken up with SR75 Suzuki’s race support programme at grass roots level.

“Racing and performing in front of the massive crowds is what keeps us going. Nothing compares to the intensity and excitement and that’s why we do it, and we’re enjoying a busy summer on the continent. 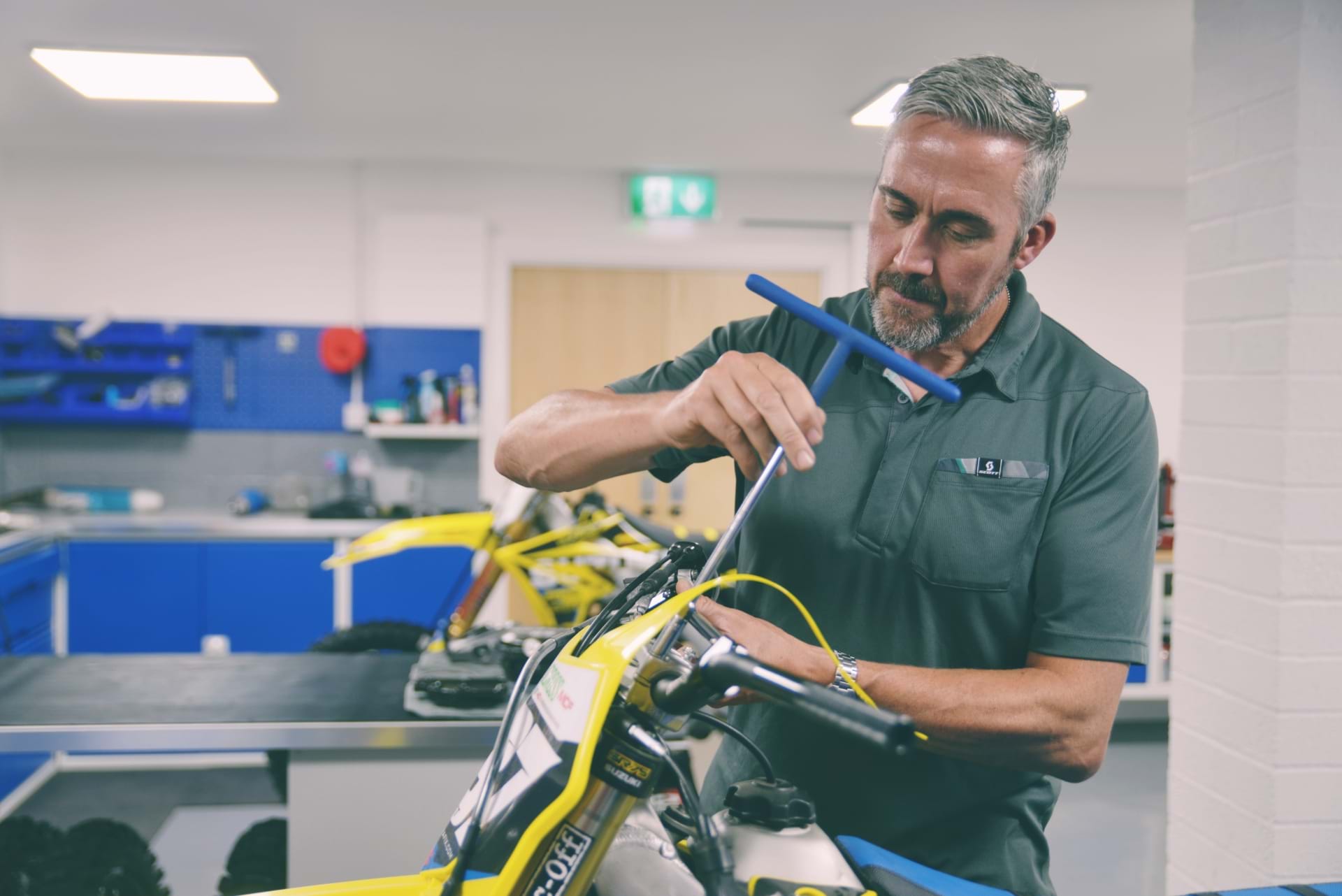 “But we’re also ramping up our race support programmes. We believe in developing new talent as well as showcasing the performance of the RM-Z450 and 250 machines. So we visit local tracks between races and race prep to offer advice and setup for Suzuki riders and help those rider's development. We see this is a big way to help riders of all levels and allow them to engage with SR75 Suzuki and the RM-Z range.”

Even though we’re only halfway through the year, the team has packed a lot into the first six months and they’re all still going strong with plenty to come this year.