Kevin’s buddies from Newcastle had been planning a tour to Venice for quite some time, but being a proud owner of a GSX-R1000 K7 and GSR750 he was not so accustomed to touring. In fact, this was going to be his first tour and first time riding abroad.

The trip lasted a fortnight and covered a whopping 4,800 miles, meaning they were averaging nearly 350 miles a day. The majority of the days were off the beaten track with an aim to enjoy the twists, turns and stunning views of the mountain passes. Although the mileage was reasonably low, due to the route, it worked out to be eight hours riding per day.

For his first ever tour, Kevin had to invest in a new bike that could cope with the high mileage and multitude of terrains that he would have to cover. Something that wouldn’t let him down when 9,045 feet above sea level on the Stelvio pass, the highest pass in Europe. 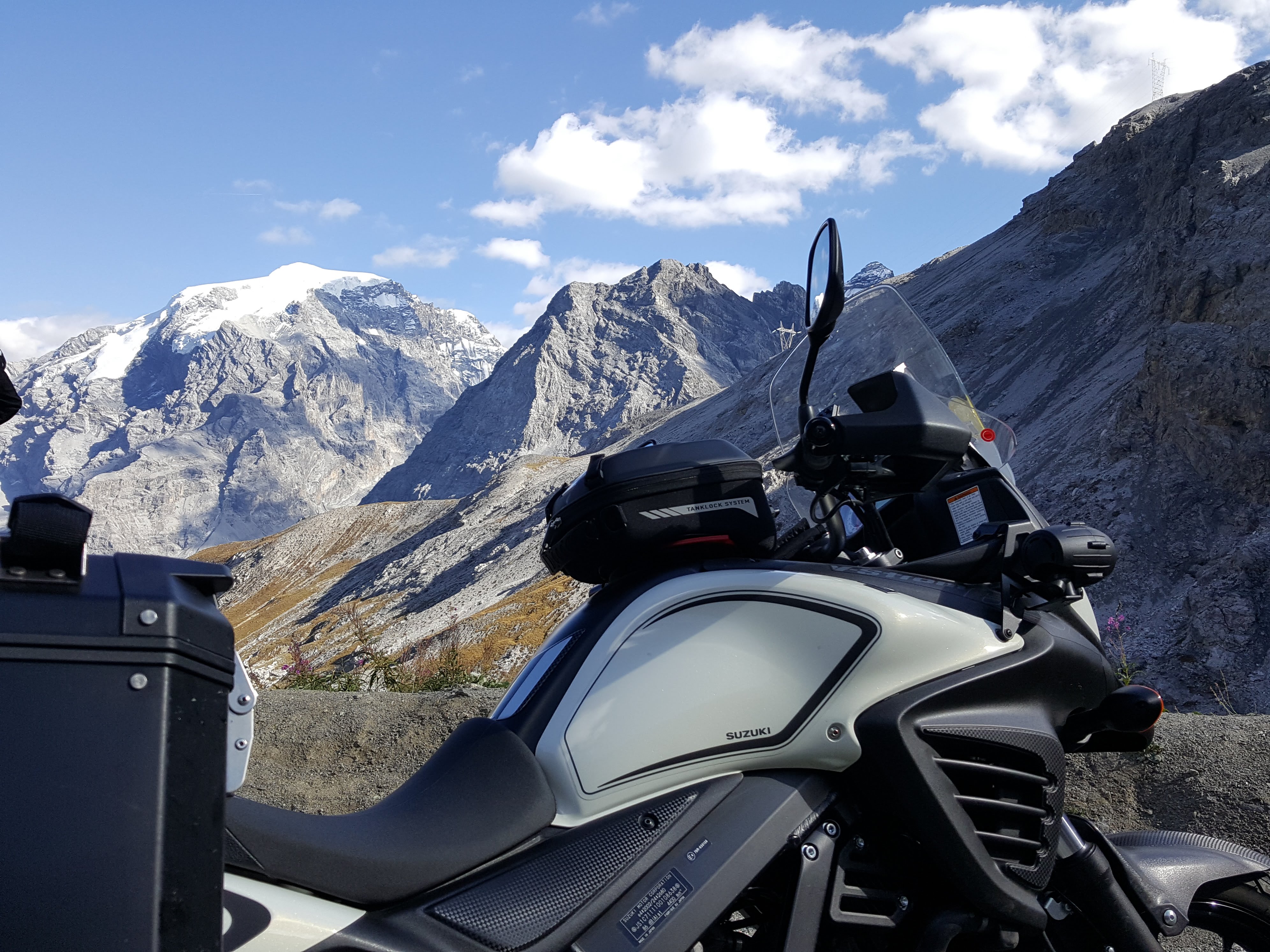 “I chose to go with the V-Strom because I love Suzukis,” he explained. “I have two others, so it was only ever going to be a Suzuki! But I didn’t know which one to go for; I thought of using my GSR, but then after reading reviews on the V-Strom I decided to get one of those. Great ergonomics, excellent fuel economy and very reliable and for the number of miles I would be doing. But reliability was my main concern and a big tick for the V-Strom.”

After purchasing his V-Strom 650 and kitting it out with panniers, Kevin and the group set off, starting their journey from Newcastle, stopping off through Calais, Reims and Mulhouse once crossing over to France. They then made their way towards Chur in Switzerland, an Alpine city and the capital of the Graubünden canton in eastern Switzerland via both the Grimsel and Furka passes.

Next stop was Ponti de Legno, Italy, where Kevin would face the toughest part of the trip; travelling through both Stelvio and Gavia passes whilst enduring some of the highest points of the trip which included some rather steep, technical riding. “The biggest challenges for me on the trip were all of the passes! Gavia and Stelvio especially, as I’m not too good with heights. Being some of the highest passes in Europe they had some very steep drop offs and they didn’t always have barriers.”

Besides the slight lack of health and safety the views were amazing throughout the passes and the group ended up at the final destination they would reach before turning back home to Newcastle: Venice, Italy, via Lake Garda.

On the way home Kevin and the others managed to squeeze in even more, visiting Fusch an der Großglocknerstraße and Reutte in Austria via the Grossglockner highway and Gerlos pass. Haguenau via lake Constance & Black Forest, and finally back through Arras and Calais crossing back to Newcastle. After 4,800 miles through some of the most beautiful places Europe has to offer, the V-Strom had completed its task, with Kevin planning on selling it upon return to the UK. However...

“I was originally going to to sell it after the trip, but I have to say, I have fallen for the bike. So many memories, it did everything I asked of it, and despite the amount of luggage and stuff I carried on it, it never felt underpowered. An exciting ride on the twists and turns of some of the passes the bike never missed a beat. I never thought I would say this but out of my three Suzukis, the V-Strom is my favourite.