Richard Cooper made his road racing debut at this year’s North West 200 in Northern Ireland, riding superbike and superstock GSX-R1000R machinery for the Buildbase Suzuki team. He came away with a second place finish and the title of fastest newcomer to make it a successful outing, before resuming his National Superstock 1000 Championship duties at Donington Park. But while he left the Leicestershire circuit with an extended series lead after taking more wins, what we wanted to know was what it was like to line up for his first ever road race.

“I wasn’t that nervous for the first race,” Cooper admits with a smile when we ask what he was feeling moments before he formed up on the grid for the first time. “I knew what I was going to do, which was go out, get more track time in, and ride my own race.”

After two days of practice in glorious sunshine on the north coast of Northern Ireland, Cooper was about to set off for the start of the 2019 North West 200’s opening Superstock 1000 race. It was not only his debut at the international road racing event, it was his maiden road race, and he’d qualified eighth, a remarkable feat in itself for a debutant. Add to that he was lining up alongside some of the greatest names in road racing, but when pressed, he maintains he had the nerves under control. 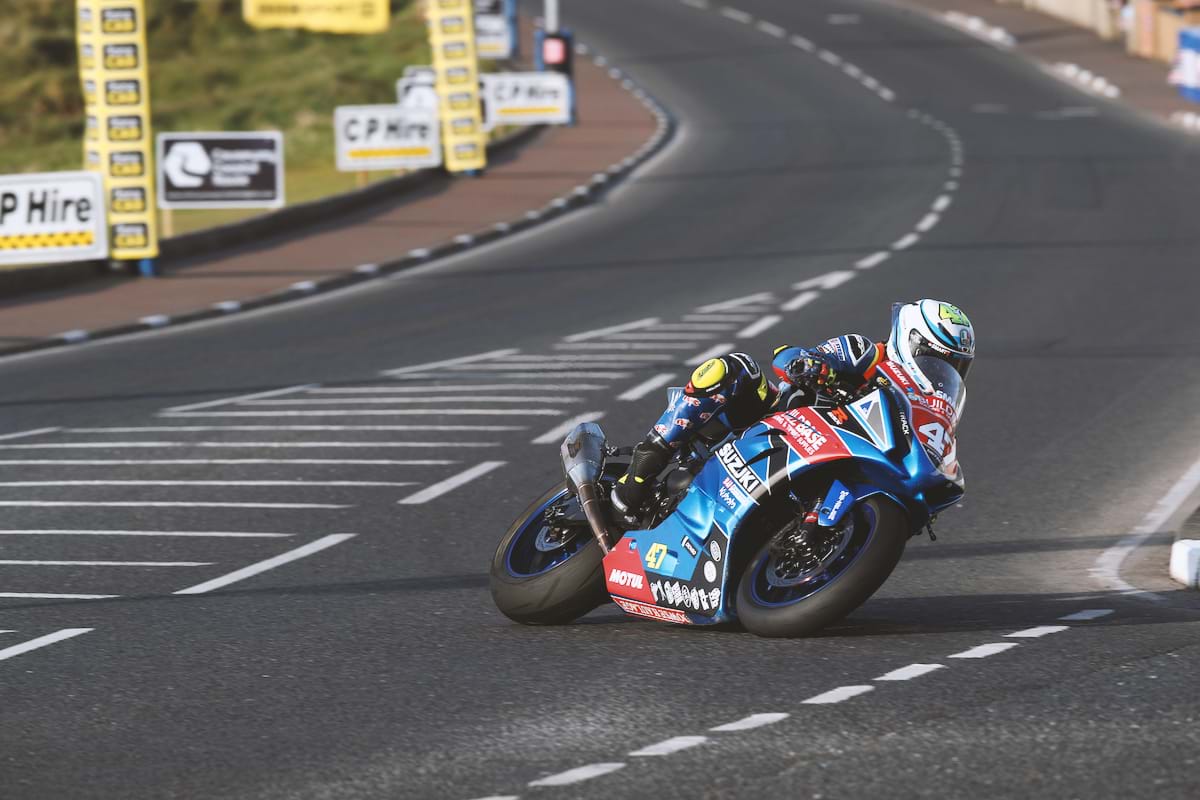 “I think there were a couple of reasons I wasn’t that nervous,” Cooper goes on to explain. “Firstly, there was no pressure; no one was watching and expecting me to suddenly go out and win. When I line up every other weekend at BSB, that’s when there’s pressure, and that’s when I get nervous, because we’re going out with a job to do, with races and a championship to try and win. So there’s pressure on myself, pressure from the team, from sponsors. At the North West, that disappeared.

“Secondly, I knew - between myself and the team - we’d done a good job in practice. I took it steady, and took lots of little steps forward, and the result was I went faster every time I went out, whether that was on the superbike or the stocker, while I left all the setup or changes to the bike to the team. Honestly, I just turned up and rode it. I don’t know what settings they were putting in it, what changes they made. I just focussed on the riding part.” 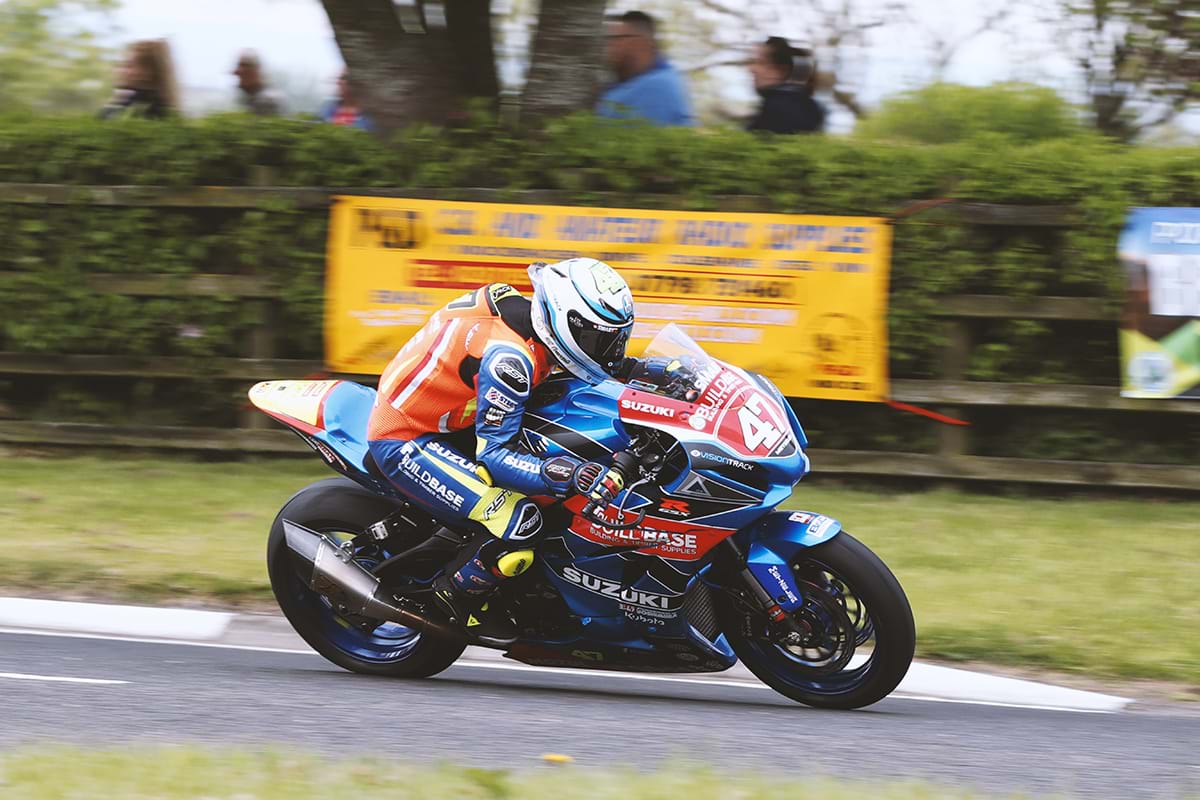 It’s very easy to say one thing before a race, and do something very different when you’re caught up in the fray, with bikes all around you fighting for every inch of road and adrenaline coursing through your veins. Yet Cooper kept his head and used his vast racing experience to do his own thing and not get sucked in.

“I have to be honest, it was quite special lining up alongside some of the biggest names in road racing, and charging down towards York Corner with them. And doing 200mph on public roads, with other bikes around you doing the same is some feeling. I got away with the leading group and was up with the front-runners on the first lap, but I knew it wasn’t time to push. It would have been very easy to have gotten carried away and ridden beyond my comfort zone at that point, but I did my own thing and just rode my own race.”

Proof, then, of Cooper’s talents and the potential of the GSX-R1000R package the Buildbase Suzuki team had put underneath him, was the fact that the Nottinghamshire rider came away with a sixth place finish, and with it a newcomer lap record of 120.659mph. 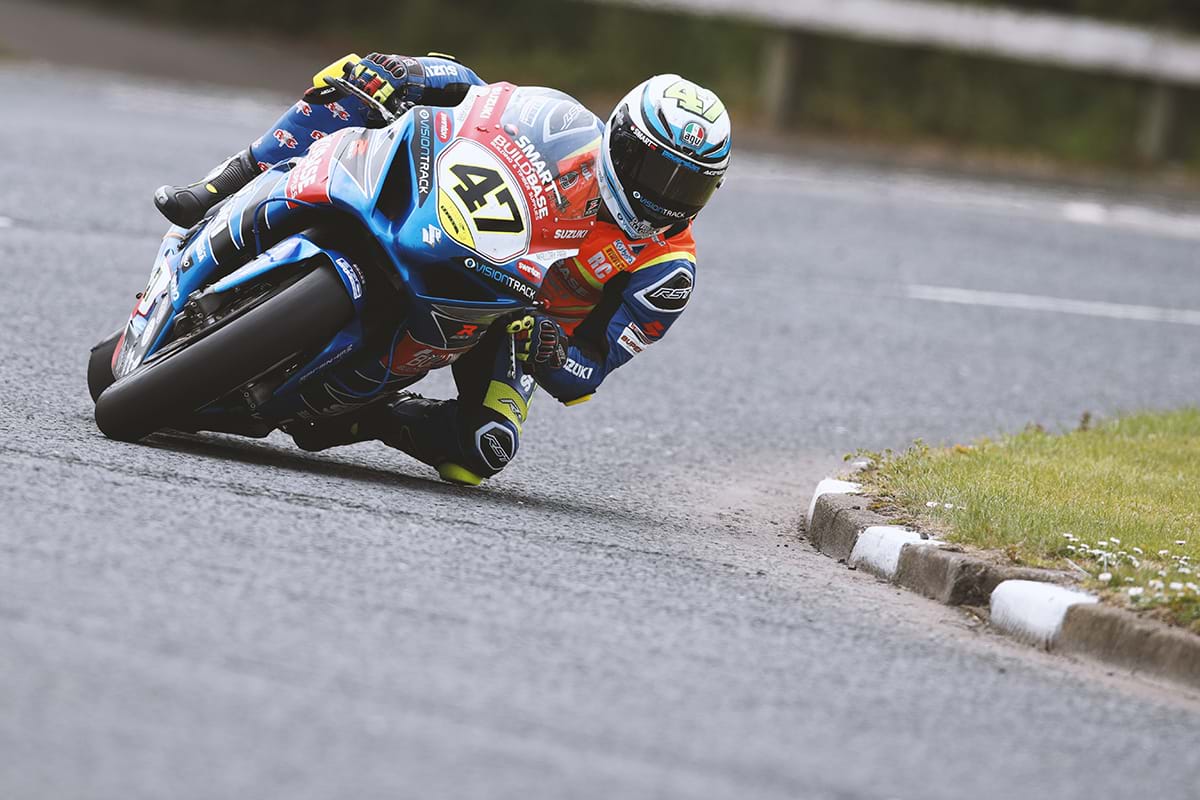 “I was surprised we did the time we did in that first race,” Cooper reflects. “I wasn’t thinking about any record coming into the event, you’re just focussed on riding your bike and going as fast as you safely can at any point. But taking records never comes into your mind, or it didn’t come into mine. I was happy with sixth, really happy. And I was even happier because I felt comfortable, and I knew I could go faster again. I think I could have easily found a couple more seconds on the superbike right away, because I know how fast the bike is and I’d already got that first race out of the system.” 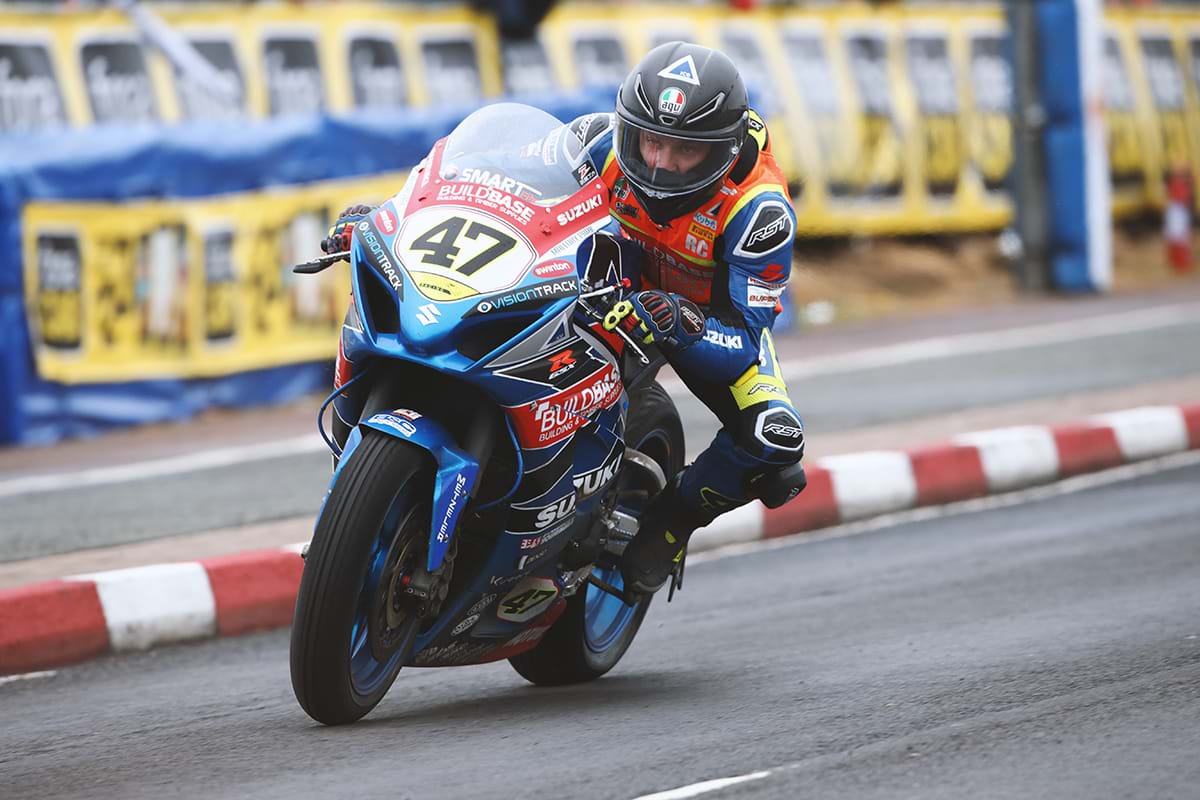 Unfortunately the week’s glorious sunshine made way for a cold and rainy Saturday, halting any plans Cooper had of going any faster around the North West 200’s Triangle circuit. But while it also saw delays and the eventual cancellation of the second superbike race, the first superbike and second superstock encounters both got underway.

Shod with Metzeler wet tyres, Cooper raced his GSX-R1000R superbike to another sixth place finish - “It was a bit crazy running down to York in the wet for the first time with a grid full of superbikes” - before jumping back on his superstock machine and racing to an incredible podium, finishing second by just three seconds in the end.

“I honestly didn’t expect to pick up a podium out there. I said before the event that I had an idea in my head of what I thought I could do, and I think that’s only natural for any rider. But I can’t say I went into the North West thinking I’d be leaving with a trophy.

“But I felt comfortable in the half-and-half conditions we had for the race and had a really good battle for second. The bike was working well and I could make passes, and in the end we weren’t that far from the win. It was a dream really. It was one of the days you go racing for.” 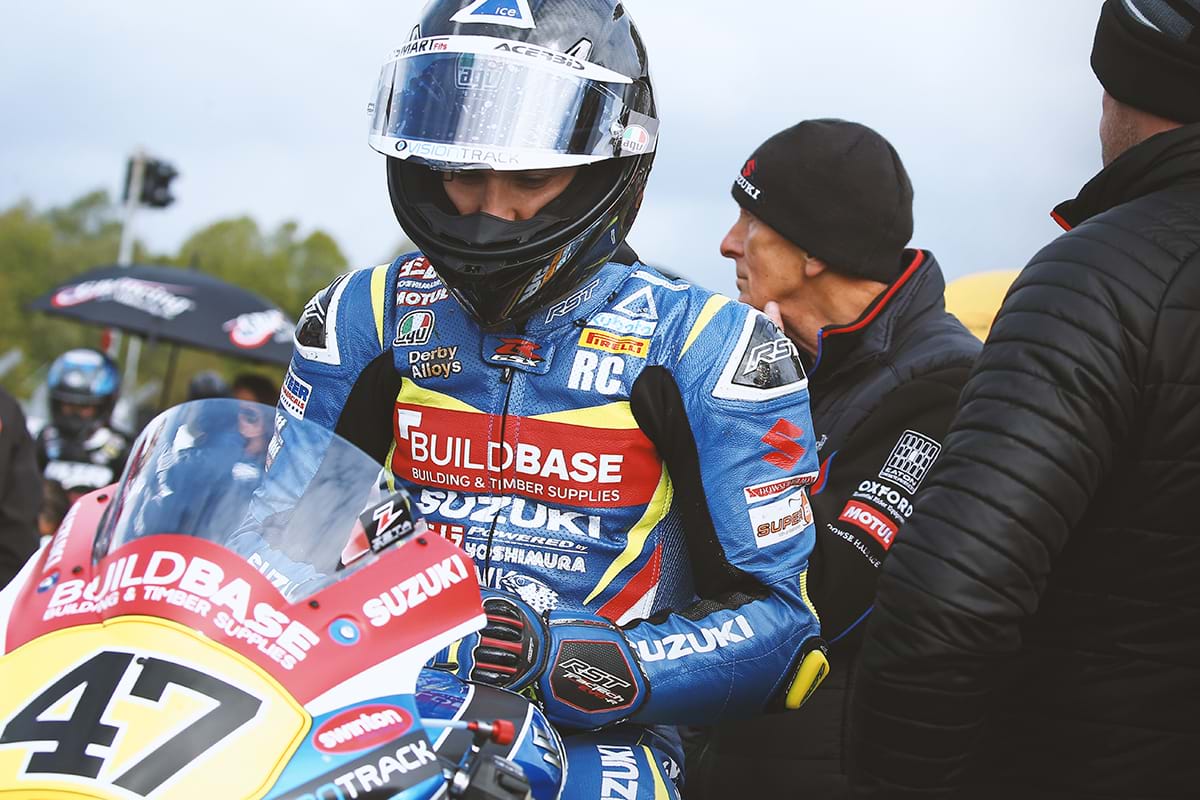 If he’s a hard racer on the track, then Cooper’s also a gentleman off it, and is eager to point out the performance of the team around him that ensured he could race to his maximum.

“I wanted to take this step and go and race the North West for a while, but I always said I’d only do it when everything was in place and I had the right team around me. It’s road racing, and you have to treat it with respect. There is more danger than the short circuits, of course there is.

“But with the Buildbase Suzuki team and the GSX-R1000R this year I had what I needed to be able to come and do it and do it properly. The team is so experienced on the roads that I didn’t need to think about anything other than riding. They put settings in the bike for each session and I just rode it.

“I might have offered a bit of feedback but I never once made suggestions; they’re the experts. I came round to start Saturday’s superstock race and Steve [Hicken - team manager] said ‘we’re going with a wet front, intermediate rear’ and I just said okay. And look where we ended up.”