Like many, we're pining to get back out on the bikes, with some of us beginning to loosely plan that next continental trip over a beer and Google Maps. But you don't always have to go that far for stunning scenery and great roads. Aside from the British Isles, after a relatively short boat ride you can enjoy a couple of days exploring Ireland. The beautiful Gap of Dunloe and the Ring of Kerry was also where we launched the 2015 V-Strom 650XT. Here's where we went, and how to do it yourself.

Ireland. A four-hour ferry ride to Rosslare and you're on a motorcycling adventure on an island bursting with culture, scenery, and more importantly, good roads. And Guinness, of course, lots of it.

The destination for the launch of the 2015 V-Strom 650XT, Ireland, and more specifically the stunning Killarney national park and Ring of Kerry, is an adventurer's playground without breaking the bank and without requiring you to take a sabbatical from work. 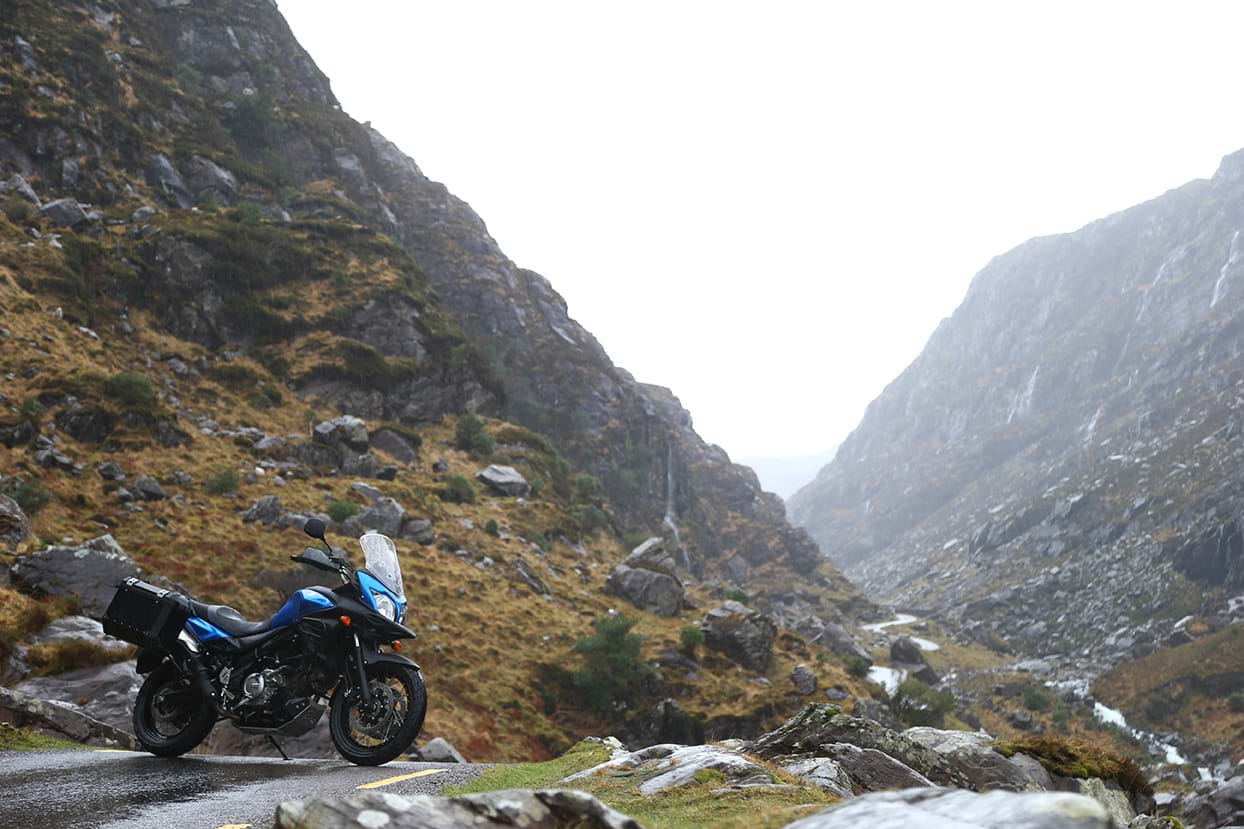 Our 14:45 departure from Pembroke in Wales got us in to Rosslare on Ireland's east coast four hours later. From there, we chased the setting sun along the E30, keeping the sea on our left, and set course for Cork.

There's plenty to see in Cork if you have the time. A Thursday ferry and arrival in Cork that night would mean you can spend Friday morning checking out the likes of Saint Fin Barre's cathedral, Blackrock castle or the Blarney castle, before saddling up again and heading for Killarney.

Getting to Killarney throws up two main route options, and it depends on what you want to from the ride and how much time you have. The more direct route takes you inland along the N22 via Macroom. If you have an extra couple of hours you can pick up the N71 and follow the coast further, all the way to the west coast before turning north and heading into the Killarney national park. If you take the coastal route, it's worth stopping at the Drombeg Stone Circle near Skibbereen, a popular megalithic site in Ireland which is also protected under the National Monuments Act. 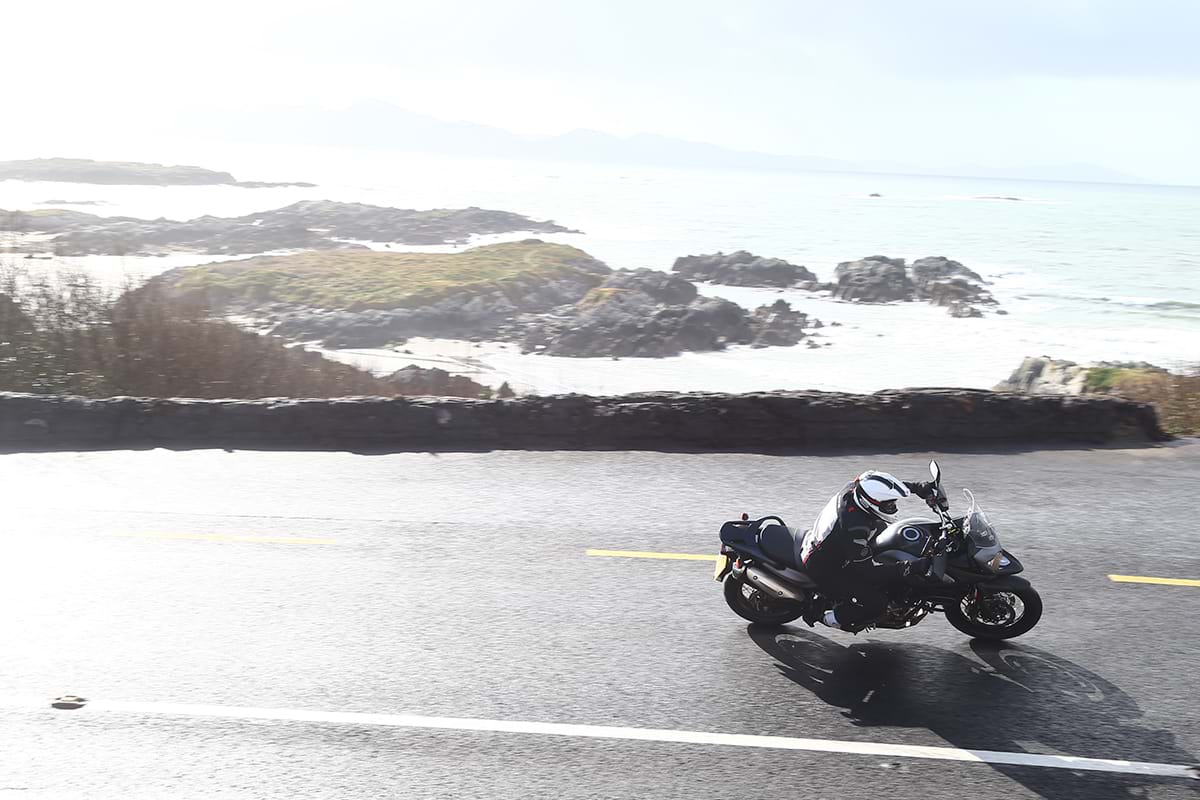 There's plenty of accommodation to choose from in Killarney, with the characterful town popular with American tourists during the summer. It's also a perfect base for a motorcycle ride around the southwest of Ireland. Our chosen hotel was the Lake Hotel along Muckross road, which sits on the shore of Lough Leane. Picturesque surroundings and friendly staff all made it a superb place to drop off bags, with a surrounding network of excellent roads.

The pick of the surrounding ribbons of tarmac is the one that takes you over the Gap of Dunloe, and is a must ride. From the Lake Hotel, look across the lough and you'll see some mountains. They're what you'll be riding through. Head north out of the hotel into Killarney and head around the town, turning left onto the N72. A few miles down the road take another left, signposted Gap of Dunloe.

The B-road quality asphalt soon descends into a pot-holed, gravely trail, that winds its way higher and higher into the rocky terrain. Up on the pegs of the V-Strom 650XTs the road picks its way between outcroppings of rock and even abandoned buildings, as well as sheep that roam free. But bizarrely, the road suddenly turns perfectly smooth and well surfaced, even if still only one car width wide.

The road continues to wind between lakes and streams with two enormous mountains rising on either side. You wanted adventure… 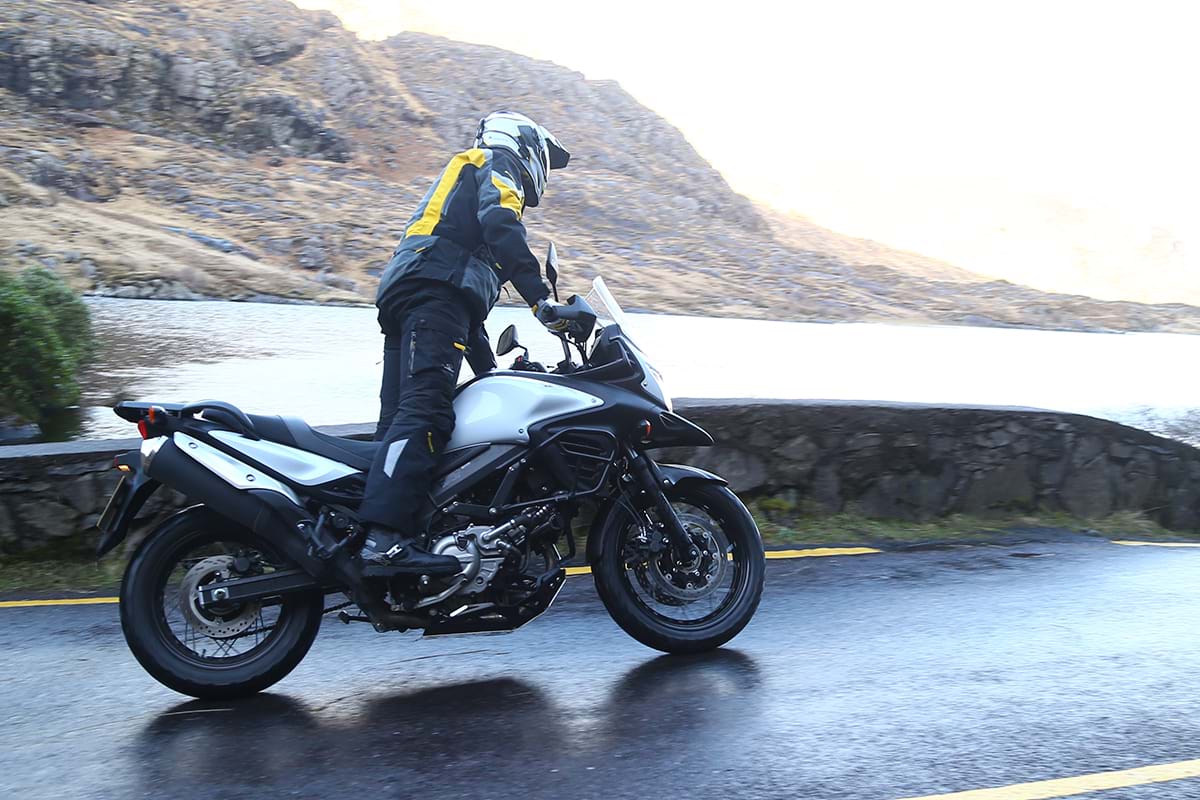 As the road begins to wind back down the other side the surface changes again, for the worse, and we work our way out of the mountains to the more hilly-terrain. The mountains remain in our vision however, with a snow-capped monster off to the right.

Following signs for the R568 and Moll's Gap and the road picks its way uphill again toward a main road. Or more 'main' than we've been riding anyway. After stopping in the lay-by at the top of the junction to admire the stunning view, turn right onto the R568. The ride changes here too, from first and second gear switchbacks on a narrow trail to a faster, flowing ride filled with third and fourth gear bends.

The morning's route has definitely left us ready for a coffee stop. Handily, a few miles down the R568 is the Strawberry Field, a quaint café that specialises in pancakes. It is definitely worth stopping at, with the pancakes boasting more variety of toppings than you can imagine and choices of coffees, teas and soft drinks to boot. If you catch the changeable Irish climate in a bad mood, like we did, there's a roaring fire to help dry you and your riding kit out. 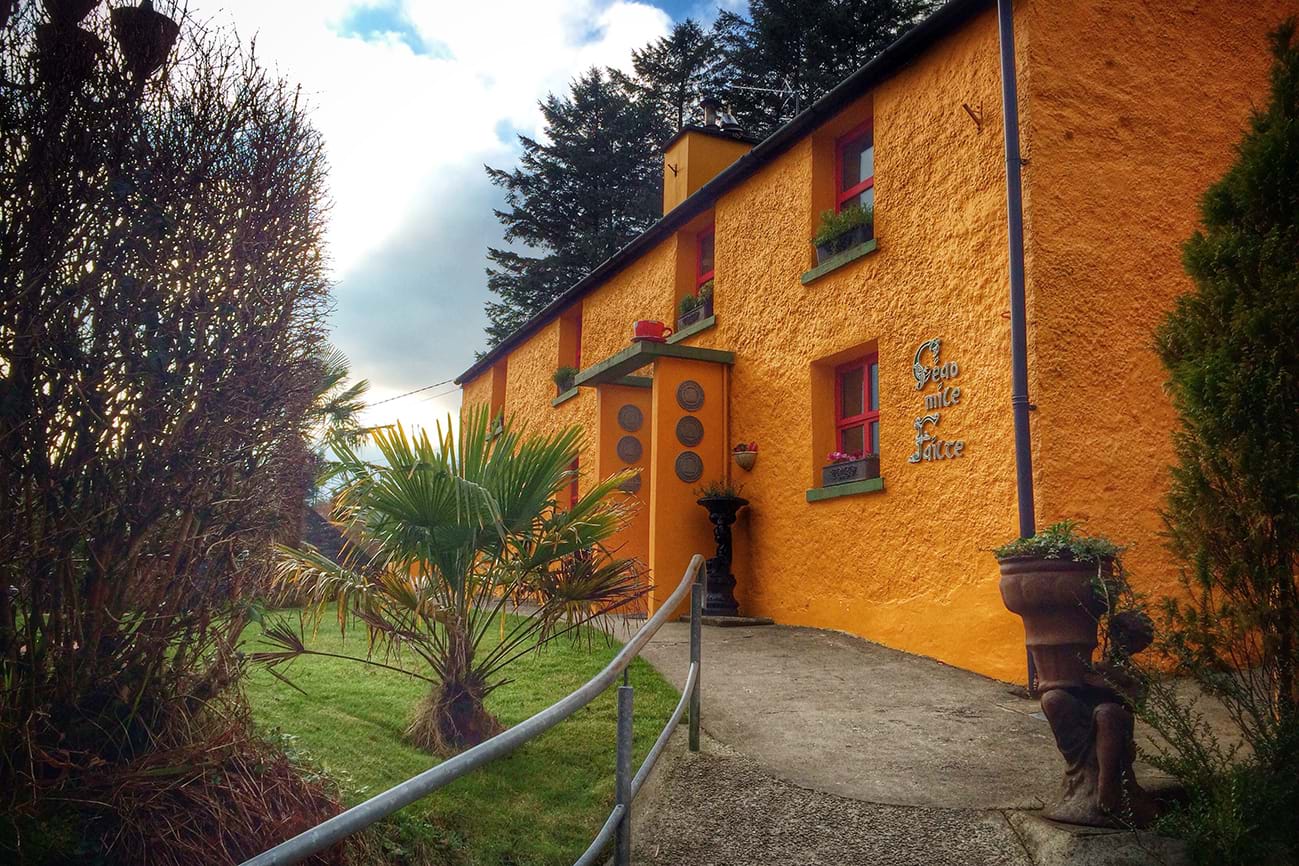 Back on the road and R568 continues to impress, and the corners come thick and fast. The undulations and sometimes slightly iffy surface keeping the suspension busy and the ride an adventure, albeit a faster one than the run through the Gap of Dunloe.

Eventually we hit Sneem, and turn right onto the well-known Ring of Kerry. Although apparently if you're a tourist you're supposed to go round it the other way, but who cares? Around Sneem there's plenty to see, including he Staigue Fort, which is dated around the Iron Age, and makes for some interesting off-the-bike time.

Back on the bike however and it's follow the Ring of Kerry, a superbly surfaced road that follows the Atlantic coast, stopping at various parking spaces designed for the tourists that flock the region in the summer to gawp at the amazing coastline on one side and the mountains on the other.

Soon the route swings north, and we're heading up the west coast. In front is a spectacular view of more mountains, set steely grey with the waves crashing against them. We keep riding, eventually turning left onto the R567, heading for the beach.

Along the R567, and plenty of other points along the route, there are roads leading down the beach. We head down one and arrive at wide, flat, hard-packed beach. After negotiating a section of rather large, and rather wet, stones and pebbles, it's onto the sand. We turn right, and just follow the beach. 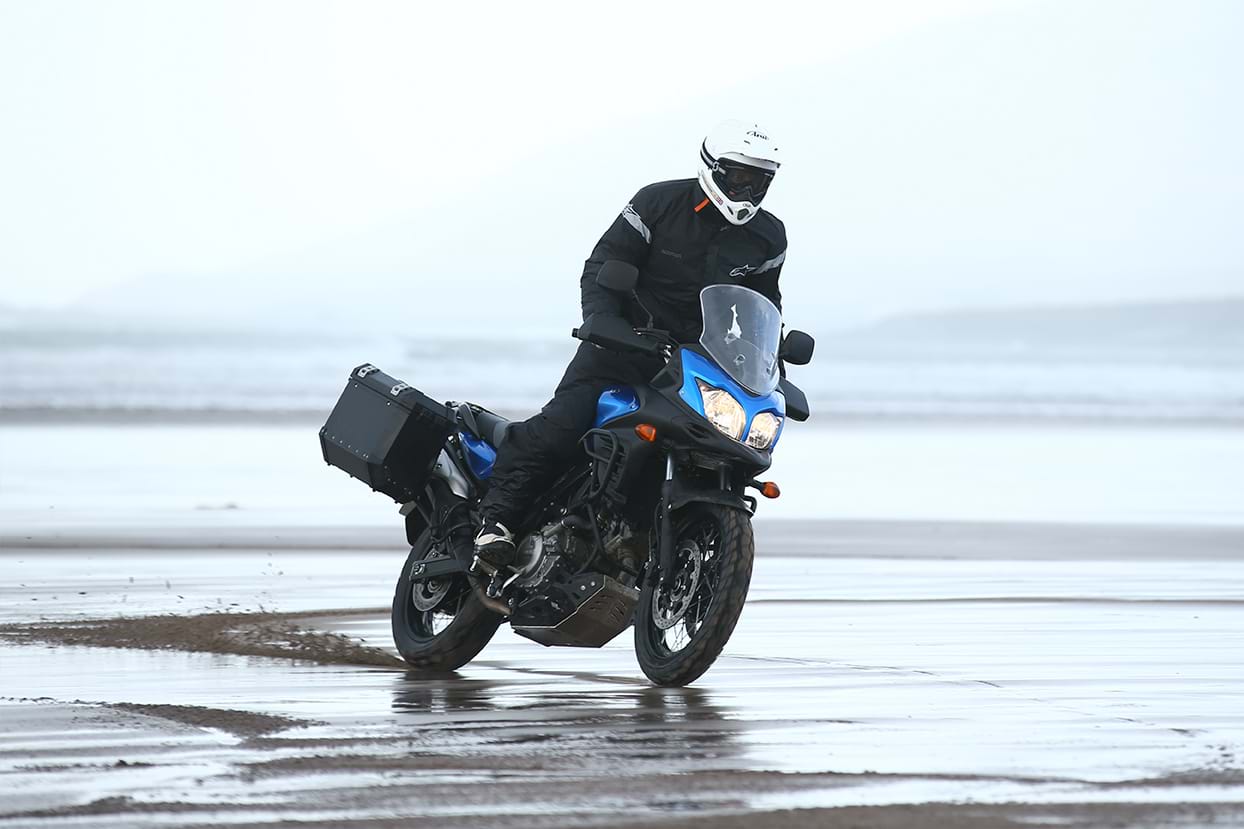 After the escapade on the beach it was back to the Ring of Kerry and back to Killarney, which completed the day's ride and led to the evening's Guinness.

Despite being a cold night in Killarney, and in our case a weekday night, there was still a good time to be had. After a spot of dinner in Cronin's Restaurant it was off to Sheehan's for an evening's entertainment. The night we visited there was a very talented local band covering everything from AC/DC to Will.I.Am and everything in between, a buzzing crowd and, you guessed it, Guinness aplenty.

With a wooly head the next morning, it was the return leg to Rosslare for the ferry home. Ireland is filled with many an alternate route. We headed in the right general direction but with a 20:45 crossing it gave us plenty of time to turn off at random on a road that looked like it would be good fun, often justified by the fact that it 'looked a bit wriggly on the Sat Nav', before we eventually rocked up at the port.

On the return ferry, before everyone drifted off for some sleep before the quarter to one in the morning arrival, there was time for a recap on the fact that, just across the water, there were mountains, there were narrow, winding trails and fast, well-surfaced roads, and beaches. There were views that you could never take enough photos of and people that couldn't be friendlier. If you're looking for a mini-adventure, we thoroughly recommend it.