I was there: Setting world record on a T20

Frank Whiteway recounts the story of setting a world record on a Crooks Suzuki T20 in 1968.

In August 1968 Suzuki GB took two teams of riders and two Suzuki T20s to Monza, Italy, in an attempt to break several world endurance records. One bike - a Suzuki GB T20 - would be ridden by Tommy Robb, Stuart Graham, Barry Smith, and Martin Hodder. The other belonged to Suzuki dealer Eddie Crooks and had been raced by Frank Whiteway in that year's Production TT. It was bored out to 252cc in a bid to set a new world record in the 350cc class. It would be ridden by Crooks himself along with Hans-George Anscheidt, Brian Ball, and Whiteway, who had prepared the bike for the attempt.

The old banked oval at Monza was notoriously bumpy and incredibly steep, as Whiteway remembered, “Unless you've actually been on the banking it's difficult to visualise just how tall and how steep it really was. Several of us walked round the track and discovered that it was almost impossible to reach the top of the banking unaided, that's how steep the angle was.”

Yet the team would have to ride at the very top of the banking or face being disqualified by the overzealous FIM officials who were in attendance. “The oval had a line painted around the inside about 10ft from the right-hand edge of the track',” Whiteway continued, “and we were told that we had to stay above this line at all times - apart from the pit-stops of course - otherwise we would be disqualified.”

To make things even scarier, much of the challenge would have to be completed in the dark. “We were told that there would be no circuit lighting, which was a nasty shock, and, consequently, we would have to run throughout the hours of darkness using only the single headlight on the bike.”

The record attempt started at 4pm with Robb setting off on the Suzuki GB-entered bike and Crooks on his own machine for the first one-hour stint. It was decided that one-hour periods for each rider would be the physical limit due to the battering both rider and bike would take on the bumpy banking, and there were doubts that the riders could even last that long. 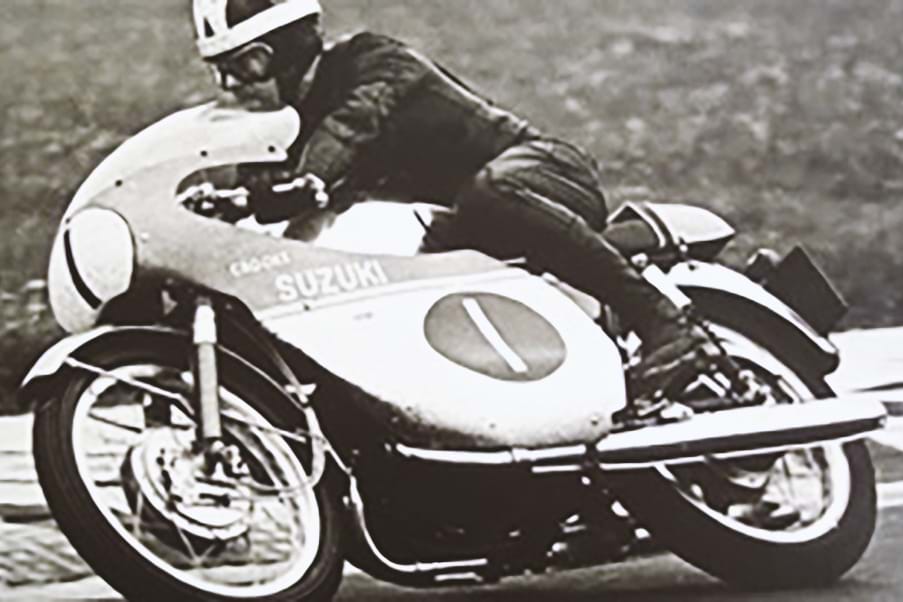 But Whiteway soon found himself enjoying the experience, even if it was a little surreal, “With the guard rail only inches away from my left leg I found that I could look out over the trees and wonderful greenery that is Monza Park. It felt very odd looking down at the mums, dads, and kids as they were walking their dogs or just lazing under a tree while, just above their heads, I was thrashing a motorcycle around a near vertical concrete wall at over 100mph!”

Record attempts at Monza were never without their problems, however. Apart from the bumpy surface and close shaves with the Armco at the top of the banking there was cramp to consider, with riders stuck in the same position for long periods. The G-force on the front forks also caused the bike's headlamp to dip which reduced riders' visibility.

But one of the strangest problems encountered by Whiteway and the others were objects on the banking which he at first thought were cat's eyes. "They looked like cat's eyes, but not in a straight line or uniformed pattern down the centre of the track but randomly along the back straight. I then realised they were rabbits, lots and lots of them. Apparently they found the warm concrete very comforting to sit on in the cold, dark night. Fortunately as they heard the bike approaching they turned away from the light and vanished."

Sadly, the Suzuki GB bike didn't quite last the full 24 hours. After 18 hours of flat-out riding an oil pump cable failed, spelling the end of its 24-hour attempt. But there was some consolation as the four-man team set new standing-start world records in the 1000km, six hour, and twelve hour categories.

At the 23rd hour, there was high drama for the Crooks team, too, as Whiteway recalled. “Just before 3pm on the second day the heavens opened and we were forced to stop running due to flooding and virtually zero visibility. There was some concern because the rules stated that the machine must cover a specific number of circuits in every one of the 24 hours in order to qualify for a world record, so if we couldn't get back on the track during that last hour we would have been robbed even at that late stage.

“Thankfully, the rain eased sufficiently for Eddie to complete the necessary laps and at 4pm the bike crossed the line and the record was ours.”

Whiteway and the rest of his team were elated. “We literally thrashed that little two-stroke twin on the red line for the entire 24 hours and it never missed a beat. Having prepared the bike, I was probably more satisfied with that fact than I was with the actual world record, although I suppose you can't have one without the other.”