I was there: doing 186mph at Suzuki's Ryuyo test track
I WAS THERE:

In 2007, Suzuki invited Bike magazine’s Simon Hargreaves to its private test track at Hamamatsu in Japan to ride the new GSX-R1000 K7 with its test riders. In the latest instalment of our 'I was there' series, Simon re-lives that experience.

Imagine the fastest, bumpiest, scariest place to ride a bike flat stick. Imagine a 1.5-mile straight, gently undulating, peppered in a variety of lumps and ripples specifically designed to expose any hint of high-speed instability. Or a lightly banked 120mph right-hander with a concrete wall tapering up to the edge of the track just as the camber flattens out. Or a blind-entry left-hander taken throttle on the stop, in top gear on a GSX-R1000, knee gently skimming the tarmac as the engine burbles off the rev limiter... again with no run-off, only a line of tall conifers waiting to collect the pieces. Sounds terrifying... but, well, it sounds kinda fun, too.

Of course, it’s not an imaginary place: this is Ryuyo, Suzuki’s test track just outside Hamamatsu – and back in February 2007 I was lucky enough to be invited here to ride the new GSX-R1000 K7, on the circuit at which it was developed and tested. 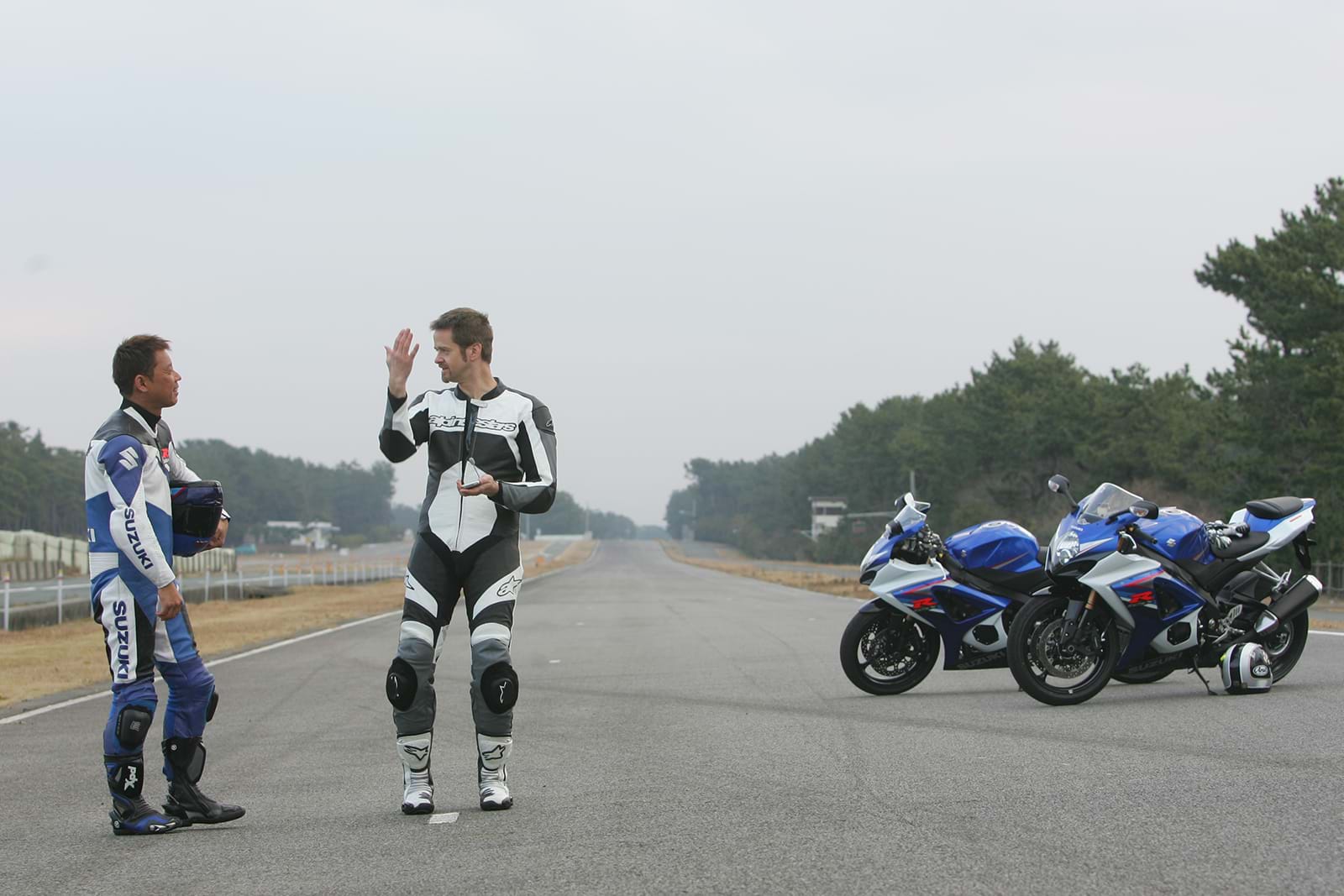 Aside from being a hugely exciting prospect, it was also an enormous privilege. Ryuyo is home not just to Suzuki’s test track, but also (in 2007) their racing R&D facilities; engineering workshops, dynos, special test chambers – this is where Suzuki’s MotoGP and World Superbike engines were developed. So Ryuyo isn’t exactly open to the public, much less nosy motorcycle writers.

And so it was a fairly chilly morning, pre-dawn, when I was bundled from a hotel into the back of a black sedan like some clandestine spy mission, and driven down increasingly narrow back streets until we arrived at the circuit gates to be met by a burly security guard. Signed in and through the gates, we pitched up at a small hut; as the darkness lifted, I could see ‘Suzuki Pit House’ on the outside. Inside, lights flickered on to reveal a pair of GSX-R1000s. Suzuki staff, engineers and two test riders materialised from nowhere for a briefing. I was hoping ‘Don’t crash it’ was high up the agenda. 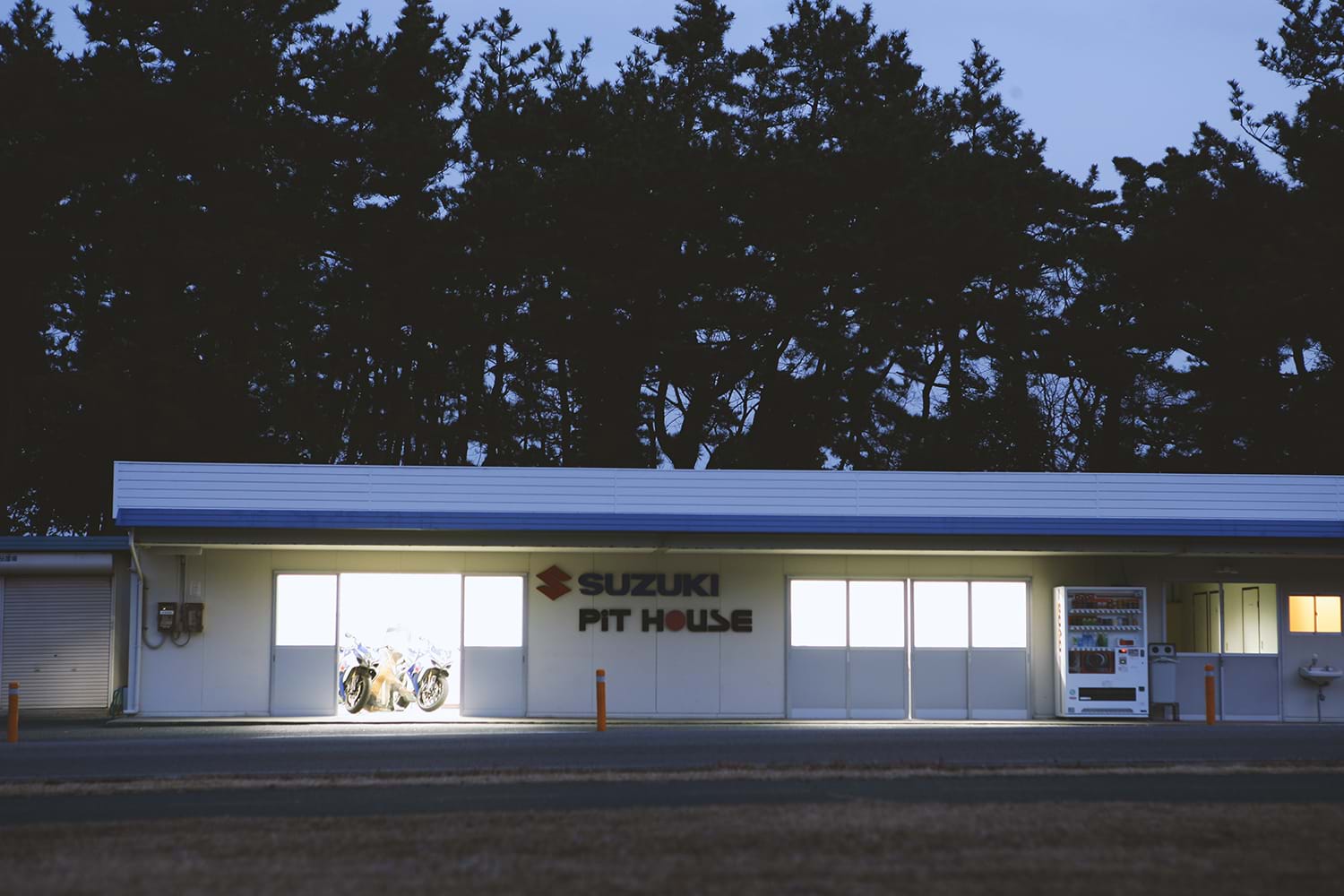 The Suzuki staff explained that Ryuyo is four miles long, with a 200mph, 1.5-mile straight, a first gear hairpin, two 120mph corners, a set of 80mph S-bends, and the hair-raising flat-in-top, 180mph plus left-hander. None of the turns have run-off. At best, twenty feet separates the edge of the track from a token tyre wall; behind that is either trees or concrete. It’s a proper bottle job.

The circuit had been Suzuki’s test track for a long time – it was designed in the early Sixties by Japan’s only-ever TT winner, the late, great, Mitsuo Itoh, when Suzuki’s booming bike-manufacturing business convinced them of the need for a dedicated test track. So pretty much every Suzuki road bike you or I have ridden has seen action at Ryuyo: every GSX-R, the Hayabusa, SV650 and 1000, RGV250, RG500, all the Bandits, the TLs, GSXs and GSs going back into history – even the 1974 rotary RE5 was developed and tested at Ryuyo.

But instead of getting down to their usual rota of testing, on this particular morning Suzuki test riders Murata-san and Nakashima-san were tasked with chaperoning me around the place for a few laps. Lucky them. 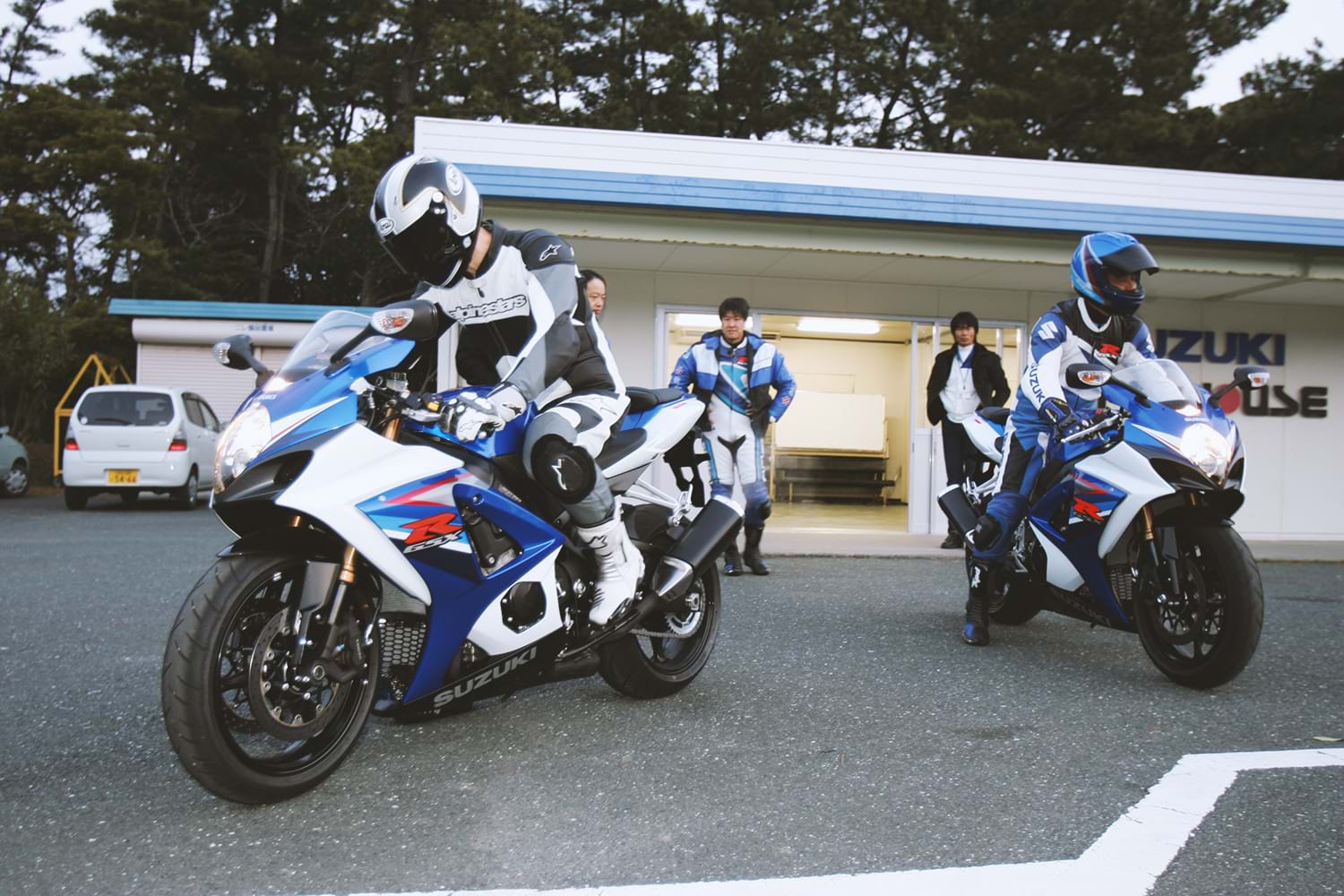 As we warmed up the GSX-Rs, I asked a few questions to ease my nerves: both had joined Suzuki to become test riders from college; neither had previous racing experience. Murata-san, who’d been a test rider for 16 years, first tested a GS500 here; Nakashima-san’s first bike at Ryuyo was a VX800. An ordinary testing day starts with exercise to warm up before they get stuck into a pre-set test programme for each bike, with up to 50 tests to complete, whatever the weather.

My last question before setting off for a few laps probably wasn’t a great idea: “Have you ever crashed here?”

Nakashima-san looked sheepish and grinned: ‘I was developing the GSR600. The rear tyre slides, then comes back... oooohhh... bang! I broke my leg and was in hospital for one month. Too much lean angle!’

Great, let’s do this! 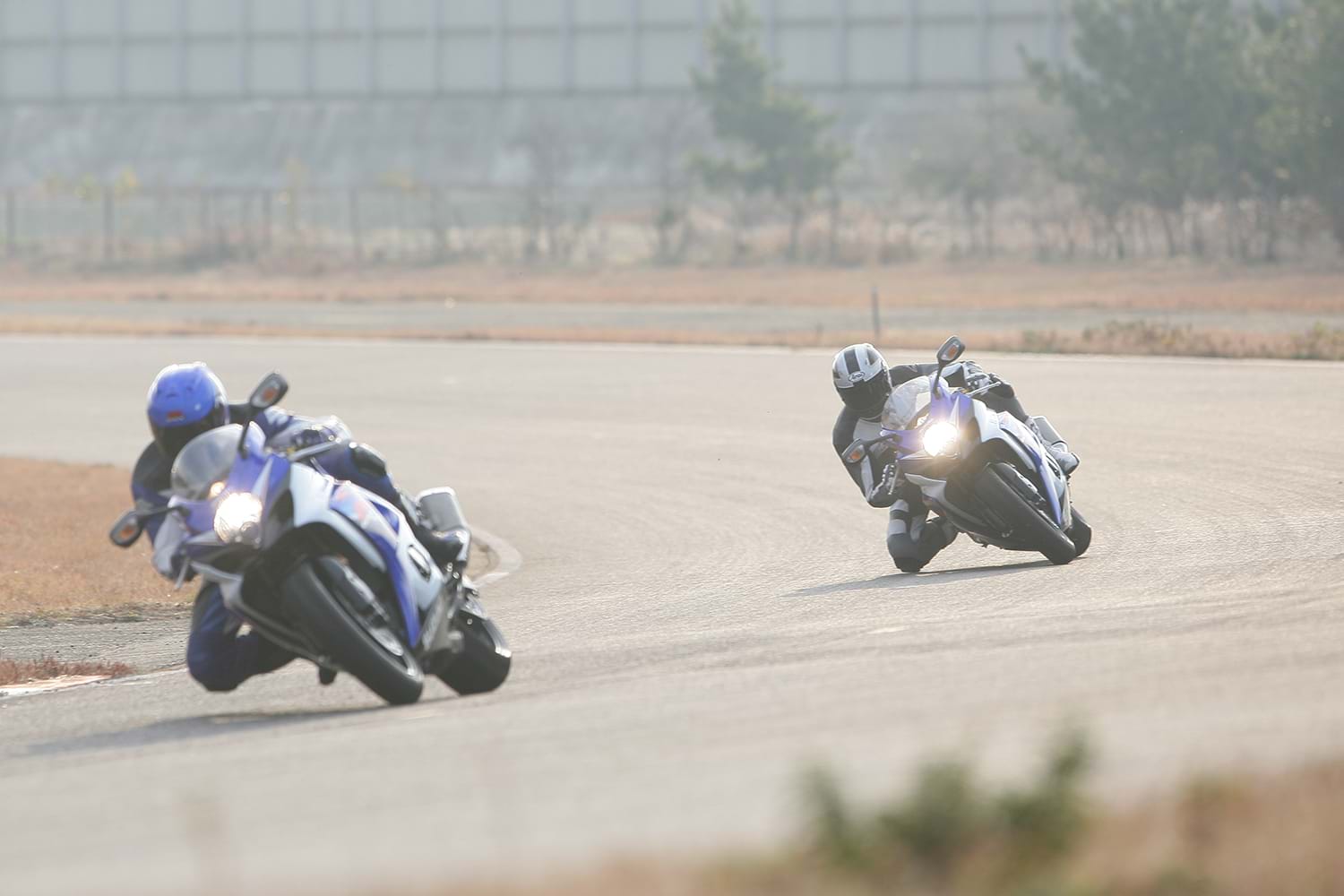 Away from the Pit House, Murata-san led me very gently at first, through the left kink, into a series of gradually tightening rights and lefts, a big hairpin, then onto that long back straight. Even on a GSX-R1000, it took a while to get to the end – which isn’t a tight corner, but a long, banked right-hander with an entry speed of around 140mph. Then it’s a tight hairpin, a long left, and building up speed past the Pit House again.

By the second lap I was chirping at Murata-san’s back wheel to speed up a bit, and he duly obliged. Through the tight Esses the two GSX-Rs were bonded together – I clearly remember thinking how totally awesome this felt, and I wondered if Suzuki would give me a job as a test rider – a kind of European correspondent. I could do that. The spring cherry blossom in Hamamatsu is lovely. 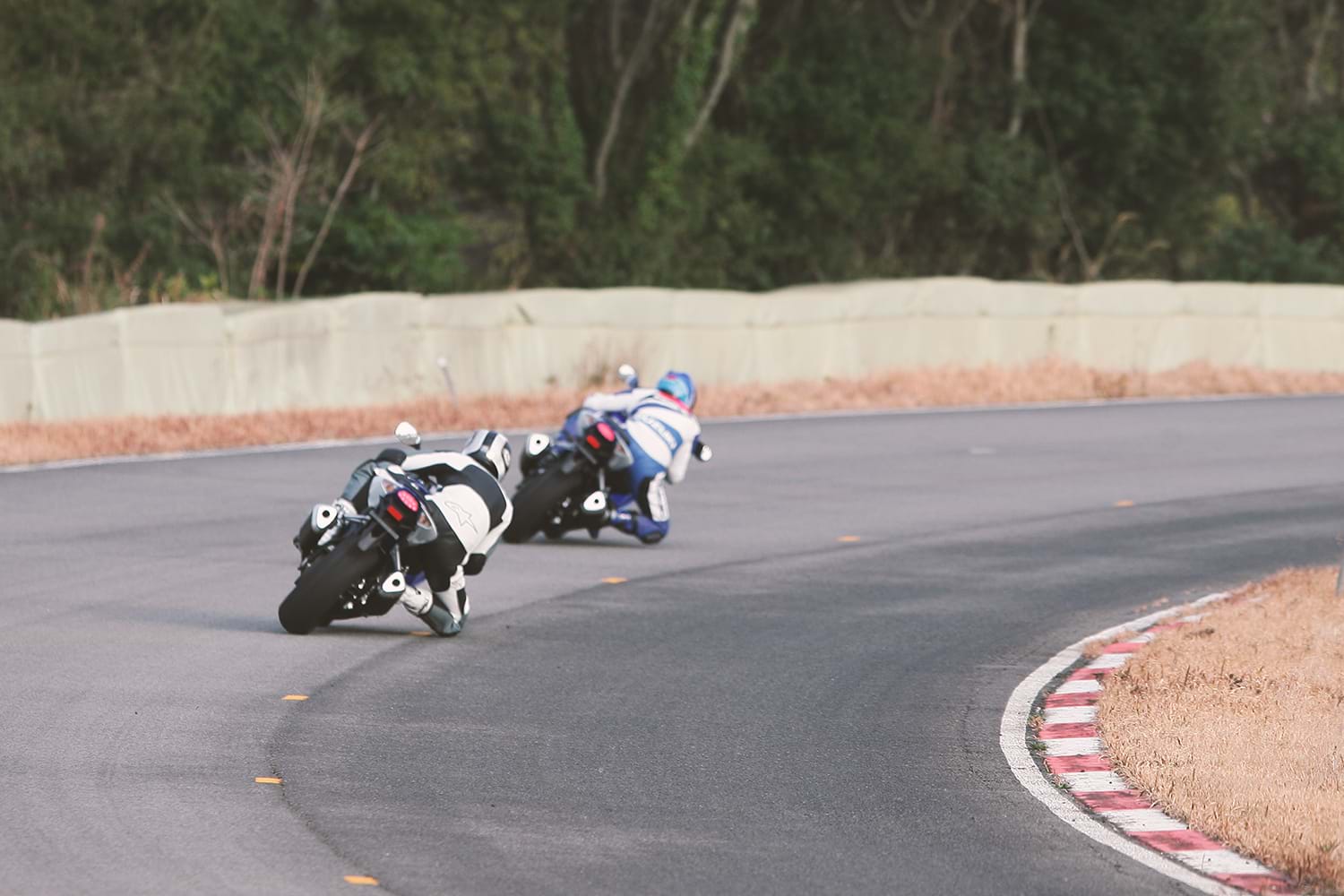 At the top hairpin – a 60mph, second-gear-style hairpin – we both carved round, knee-down, in synchrony. Then we powered out onto the back straight, heads down, flat stick, clicking through the gears into top – I was a bit lighter back then (ahem) and there wasn’t much between us on top speed. The lines of trees flashed past on either side, suspension battering away over the bumps – but on-board, the GSX-R was utterly unflappable; a bubble of calm surrounded by the cacophony of wind roar and mechanical mayhem. It suddenly occurred to me, having spent many a late night screaming home across similarly bumpy Fen roads from the Bike magazine office on a variety of Suzukis, including a GSX-R1000 K3, K5 and Mk1 Hayabusa, that the reason they all handled impeccably at speed was because they were set up at Ryuyo.

At the end of the straight I don’t remember seeing a specific braking marker; I think Murata-san peeled into the fourth gear right-hander on memory alone; he must have done it often enough to be able to do it blindfold. But what a corner – 120mph, knee on the deck again, skating deliriously towards the outside of the track. We piled through the tight hairpin, swung around the long left (hang on, how long has it been since the last left-hander?) – and then built up speed for the fastest corner at Ryuyo.

It’s more of a kink – but by the time the GSX-R was back in top and showing over 150mph, it’s a corner alright. And even better, a slight rise in the track makes the entry blind – you have to steer before you see the apex.

At this point the gulf between Murata-san’s 16 years testing at Ryuyo and my feeble dreams became apparent as he levered the GSX-R onto its side without so much as rolling off, and disappeared through the corner while I mucked about thruppenny-bitting like a novice. He very kindly waited for me at the next corner, and we repeated the whole thing. And again, and again. 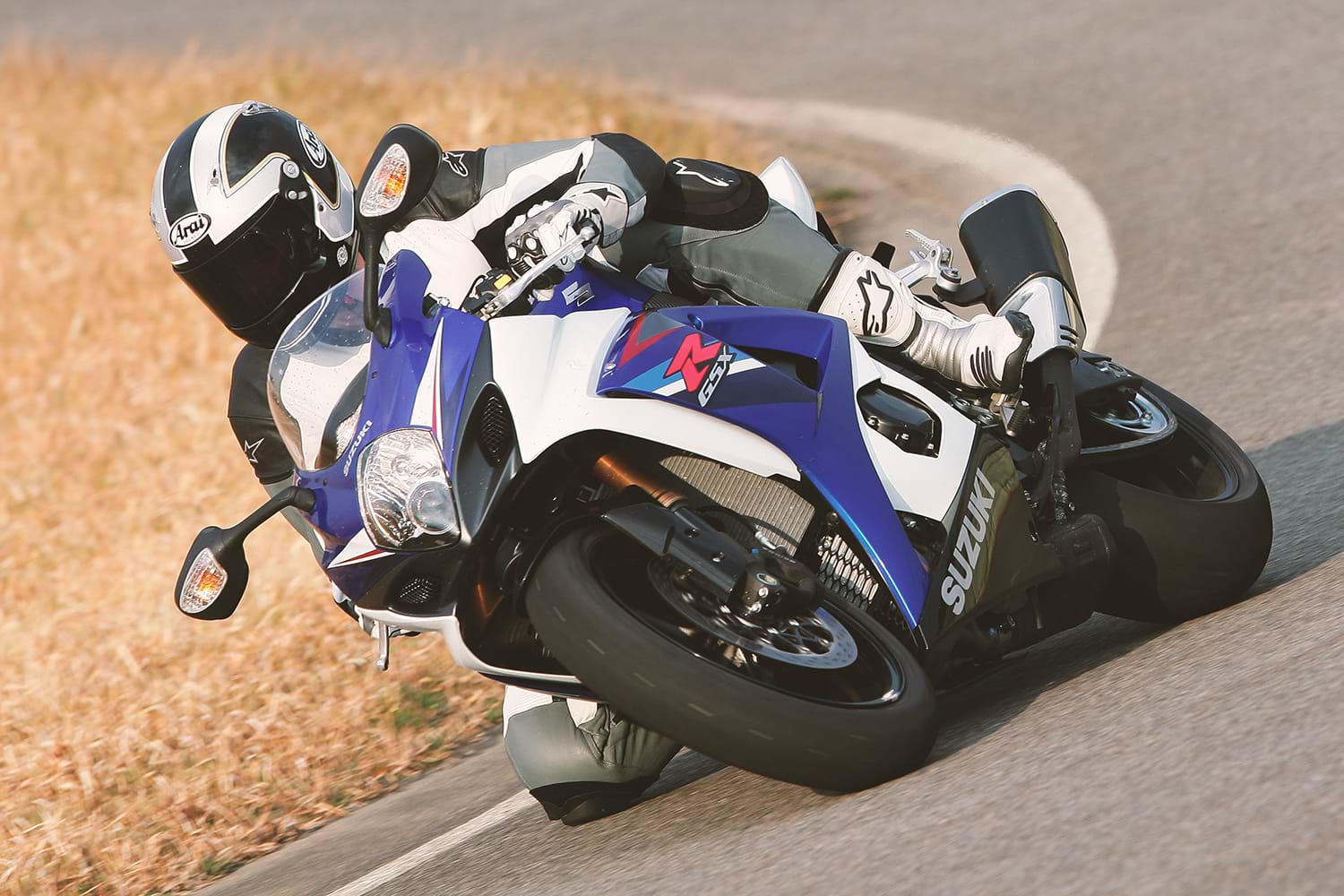 Eventually, because he actually had got a proper job testing Suzukis, my playtime was up and we pulled in. I remember leaning off the GSX-R and shaking Murata-san’s hand in sheer gratitude – as an experience, riding with him around Ryuyo would take some beating.

Although having said that, the next day I was shown around Suzuki’s factory, interviewed Suzuki’s Managing Director and top engineers, ate in the canteen, and had a personal tour of Suzuki’s private museum. But that’s another story...