Shinji Tamura - a designer with Suzuki since 1998 - lifted the lid to us on how bike designs come to be, and the changes he’s seen in the job since the turn of the millennium.

Shinji Tamura has designed plenty of bikes - and cars, too, for that matter - including road bikes and even some of Suzuki’s most famous concepts including the Biplane. Having started back in 1998, he’s seen plenty of designs come to market, some consigned to the bin, and plenty of changes in the way those designs even come into being. 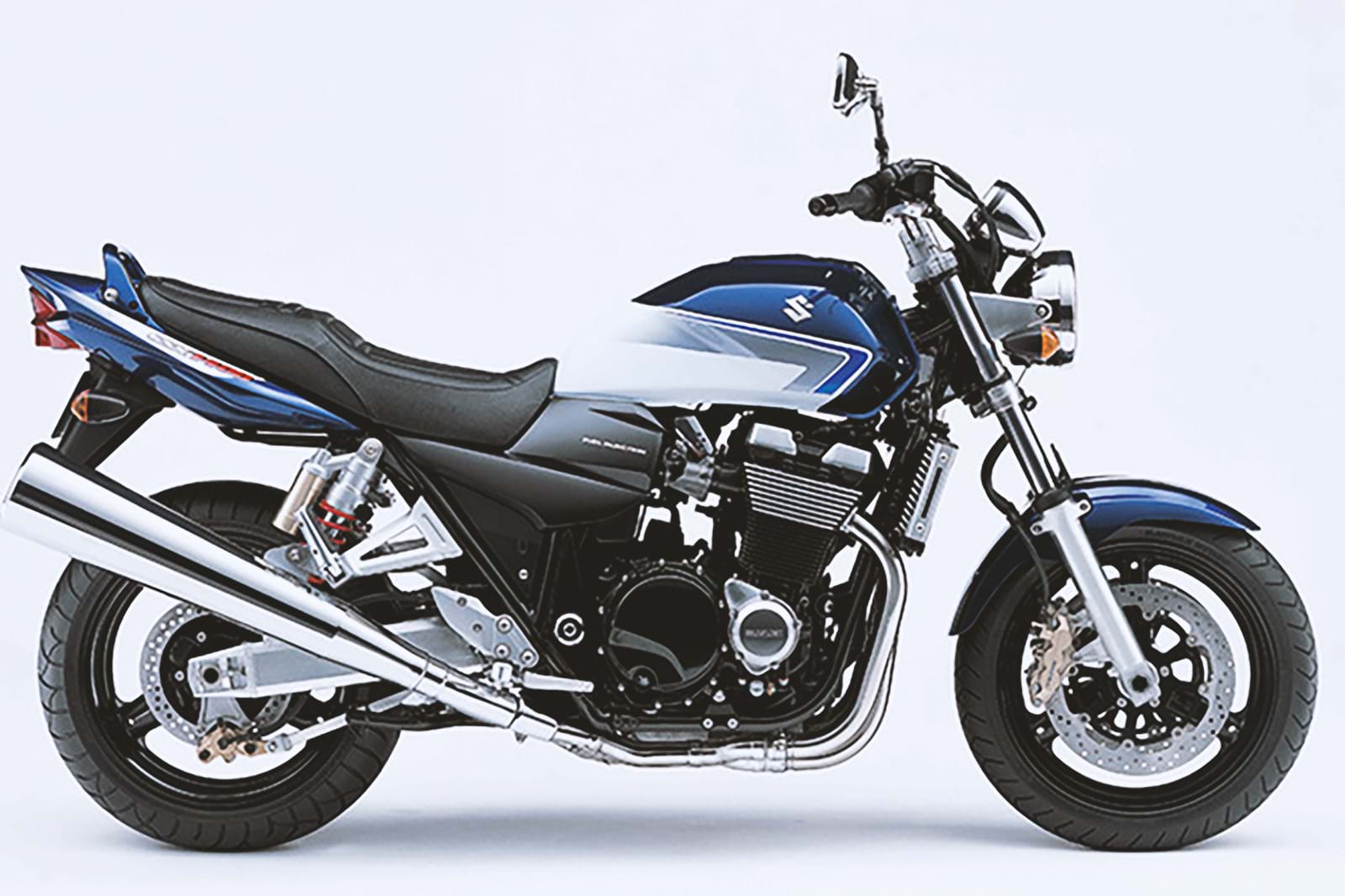 “The GSX1400 was the first bike I designed when I joined Suzuki,” Tamura san told us during our conversation. “I designed cars for nine years before I started designing motorcycles. At Suzuki I have designed lots of bikes, as well as many concept models, and I’ve worked on a lot of projects.”

Almost stereotypically, during our chat Tamura san has a small pad and pen out in front of him, and is doodling away. He produces a rough sketch of a café racer. It’s hard not to wonder how many of these are drawn and never seen by anyone. 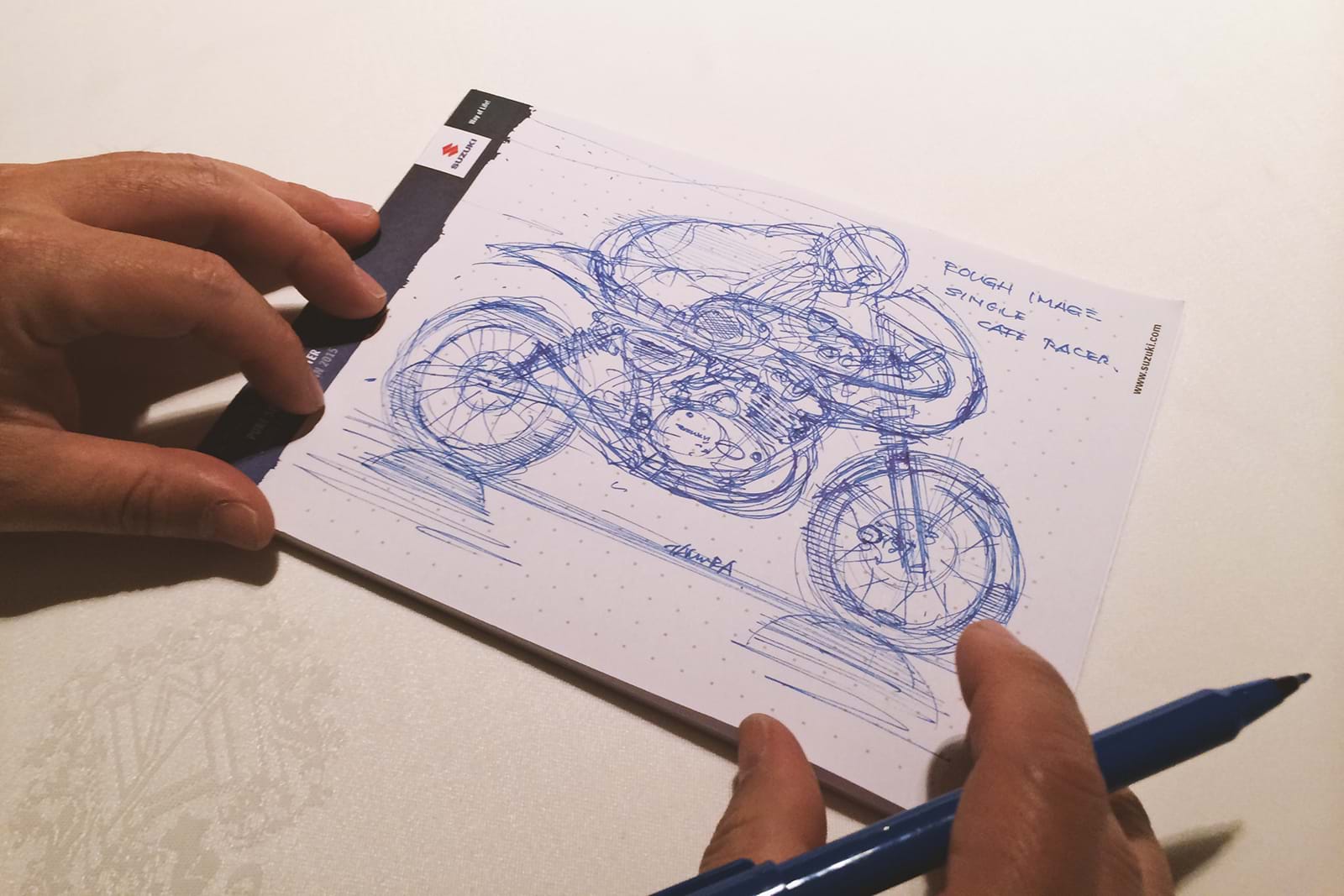 “I also sometimes sketch something completely different to the project that I am working on or at different times. If I can't use them for my current project then I store the ideas if I know I'd like to use them in the future.”

Sadly for designers, though, they’re not the only ones involved in a model’s development. They may get a blank sheet of paper - pardon the pun - at the start, but eventually they have to work together with the engineers. 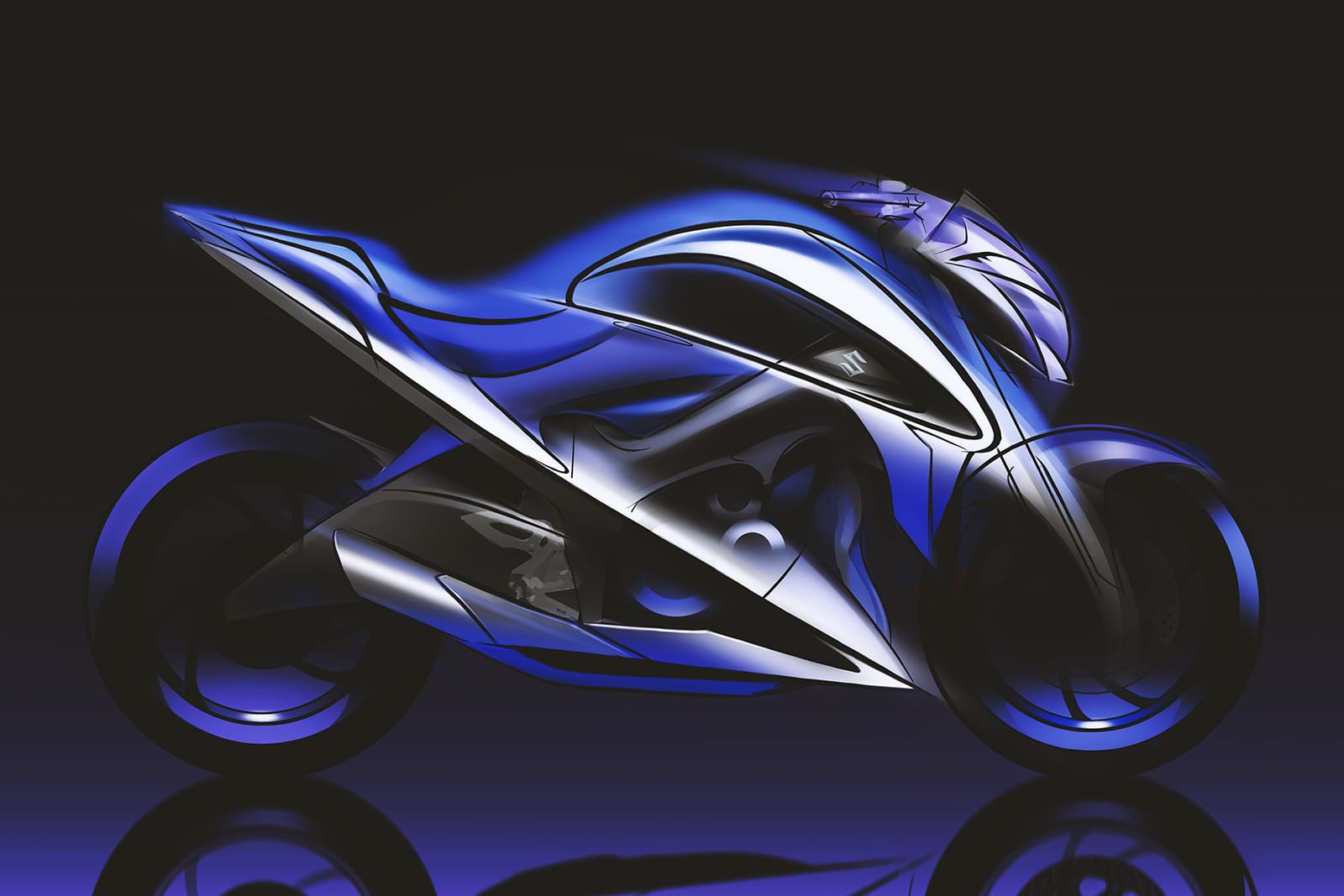 "When we start a project we conduct surveys with customers to get an idea of their preference on styling and usage. I draw a lot of rough sketches; some aggressive ones, classically-styled ones, manga ones. I draw these to get a direction from the surveys.

“But I know that some elements will have to change as the project takes its direction. After we agree on the style and sketches we like, my drawings go into more technical detail. I work with the engineers who may require certain measurements or dimensions or space for parts and components.

"On GSX-S1000, for example, parts changed around the headlight and tail section: these evolved over the course of the project. My sketches are always considered for function from the start, but when engineers test parts or advance elements, they ask for changes. These can be for better light distribution from the headlight, better aerodynamics, or comfort, etc.

"When we're moving the project forward, engineers have already decided on an engine, on the wheels, on the forks. To help with the uniqueness of Suzuki's design, I build a clay model after the final sketches. We make the whole motorcycle out of clay, which is a lot of work. I have to talk in a lot of detail with the engineers about dimensions, but then we build a full-size clay model. 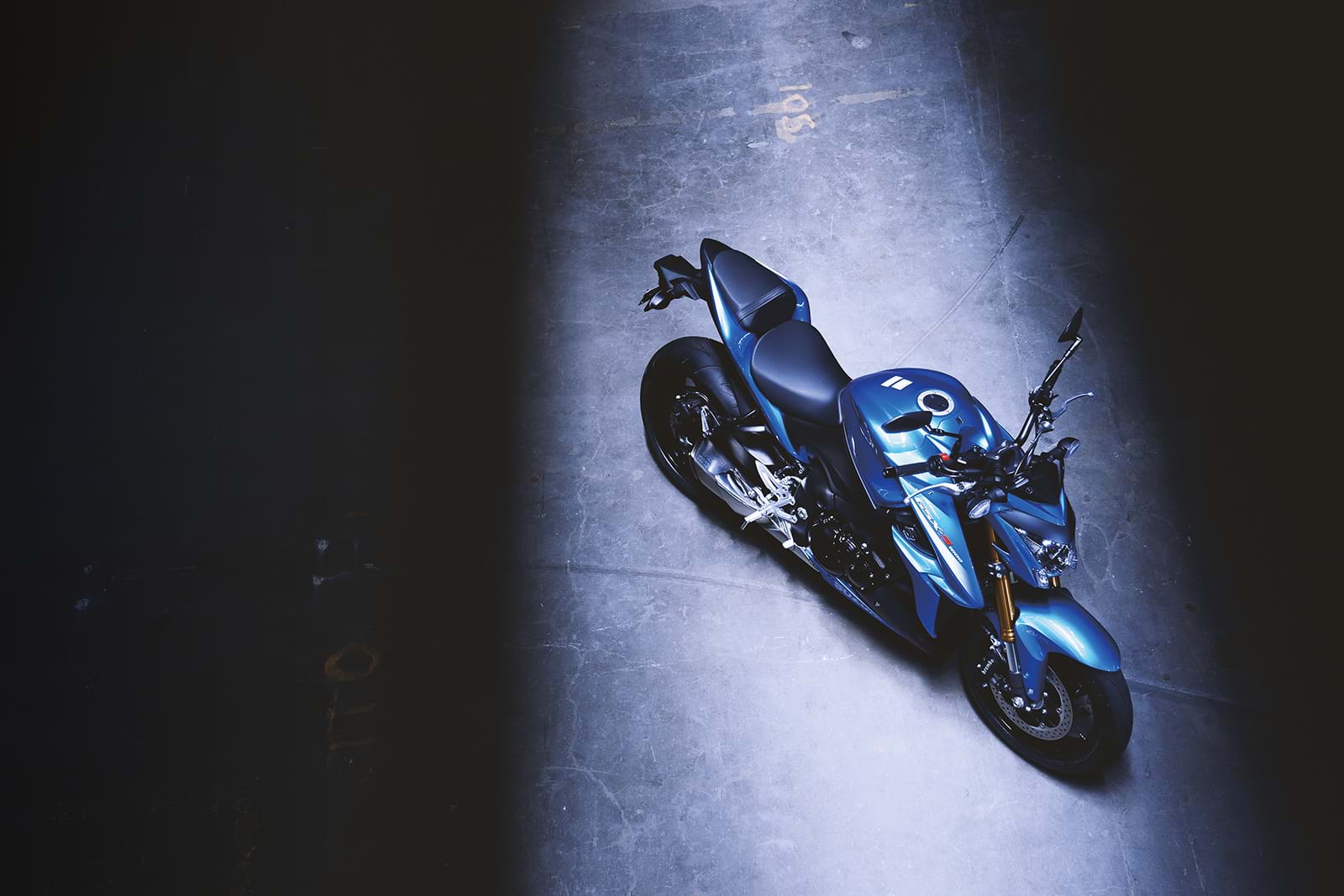 "Using the GSX-S1000 as an example again, the bike was kind of a big brother to the GSR750 at the time, so I wanted there to be some resemblance, which I keep in my mind when I'm drawing, but the inspiration for this bike came from the idea of the movement of a crouching 'beast' and the beauty of the muscle and muscular poise.”

However, like every industry, time brings about change, and since 1998, Tamura san has seen a shift away from the humble pen to the use of more and more technology.

"Since I started the digital design element has been the biggest change in my role. We have lots of CAD and computer technology, so I have had to adapt to the new ways of design. But I believe that in the design of the motorcycle design with a pen is still important to creating the right shape, which is why I keep working with a pen on new projects."

And when you’ve designed bikes for as long as Tamura san has, you must have a favourite, right? 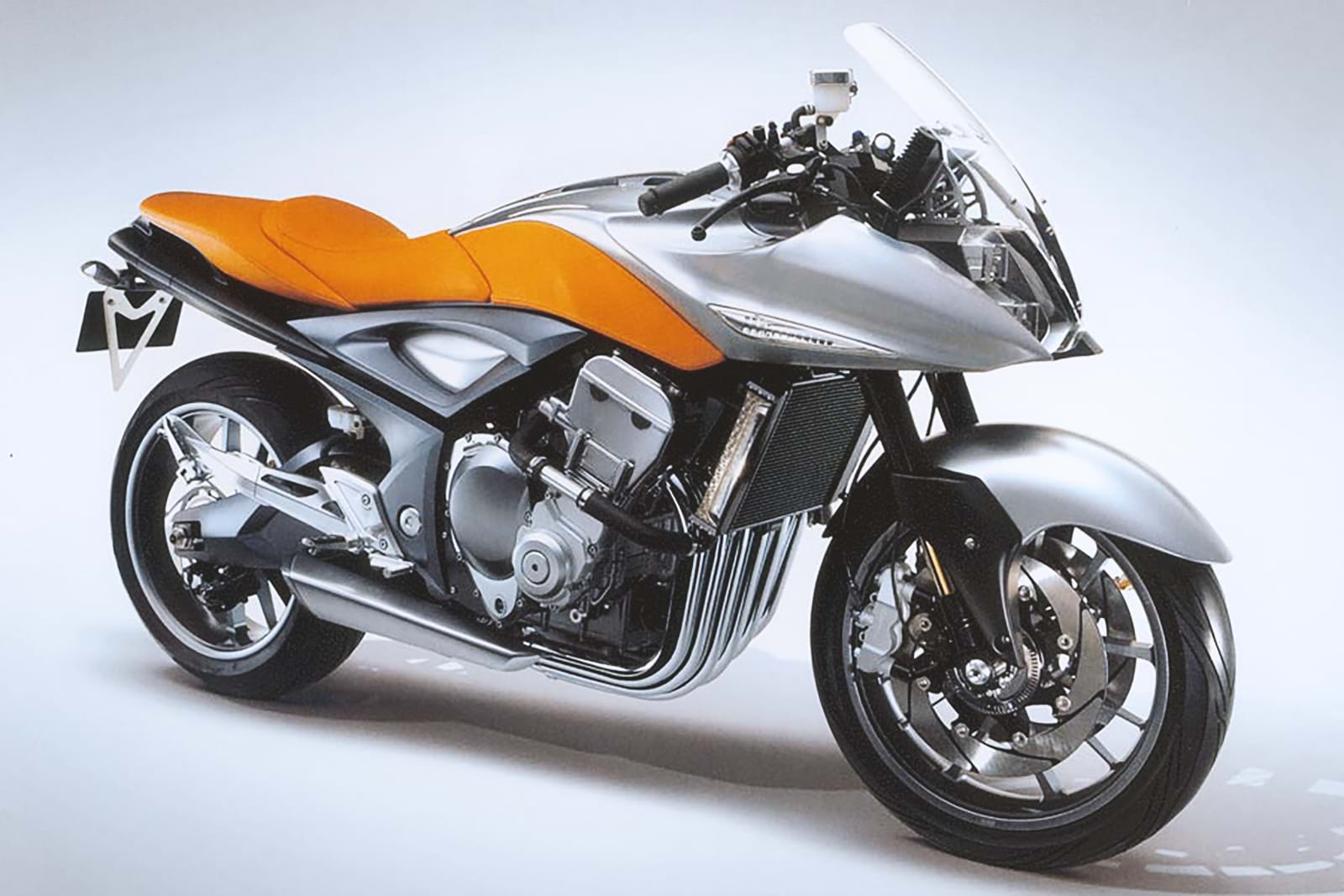 "I like the GSX1400 as it was my first, and I was also really happy with the GSX-S1000. I think that motorcycle design has to be a good mix of functionality and beauty. You have to think about how it looks.

"But I also like concept models because I can focus only on my mind and the ideas I have to create something. I designed the Suzuki Biplane, with which I wanted to give the joy of two-wheels, but also be inspired by the feeling of flying or piloting an aeroplane. My favourite, though, is probably the Stratosphere concept model.”